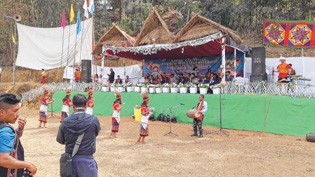 Our Correspondent
CHANDEL, Feb 20: Attending the 5th General Conference of Tarao Student's Union at Khuringmul, Chandel, PHE Minister Losii Dikho assured to provide proper water supply facilities under New Development Bank (NDB) to the villages of Khuringmul, Leishokching and Heikakpokpi.
The conference organised on the theme "Reasoning the identity" will be held from February 18-22. It was attended by former Minister Morung Makunga as guest of honour;  leaders of UNC, NWU, ANSAM, Tarao; ex-ADC members; Chandel CSO leaders and village chiefs.
PHE Minister Losii Dikho lauded the efforts of the Naga leaders to promote the Tarao tribe and its identity.
"The Tarao tribe may be small but unique in its own rights, we have to stand together to promote our children and youth", he stated.
Boxing superstar Mary Kom is from a small tribe but is recognized globally. The positive contributions of the younger generation in the society through education, development, etc will reflect the positive aspects of the tribe and not the size of the tribe, he added.
Dikho also lauded the leadership of Chief Minister N Biren Singh for bringing peace and development in the State.
"If Manipur has witnessed tremendous changes especially in law and order, peace, development, it is because the State Government under CM Biren has reached out to the people and invested all possible resources to achieve it. Manipur has become a sports hub and healthcare destination not by chance, but by the countless and collective efforts of both the people and Government", he said.
He further assured to resolve all water scarcity issues in the areas in the coming months and appealed to the congregation to extend their support to the State Government in achieving its goals and objectives.
Ex-MLA Morung Makunga stressed on the development and welfare of the students and youth, who are future pillars of the society.
Solidarity messages were also delivered by UNC president, Kho John; ANSAM president, Peter Monsang and NWU president, Asha Wungnam.
According to the villagers, the Tarao tribe has one of the lowest population in Manipur with just 4 revenue villages in the State. The 3 neighbouring villages of Khuringmul, Leishokching and Heikakpokpi have no Primary school or Primary Health Sub-centre, no proper Anganwadi centres or even road connectivity from Pallel town.