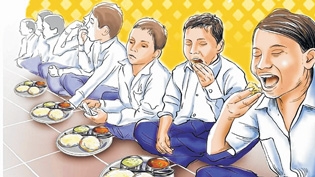 By Our Staff Reporter
IMPHAL, Feb 21: Distri-bution of the cost of cooking food under Mid-Day Meal scheme to children has been terminated as per an instruc-tion from the Central Government.
According to information received from Education (S) Department, distribution of the cost of cooking mid-day meal to children has been terminated as there were reports of parents utilising the money for other purposes.
Now, the money sanctioned for cooking mid-day meal is used in buying different articles which are distributed to children.
Rice for Mid-Day Meal scheme is provided by the Central Government through FCI while the cost of cooking and money needed for buying vegetables and other items for preparing dishes and payment of honorarium to cooks are given in the form of cash by the Ministry of Women and Child Development.
Sources said that children are given rice, dal, potato and cooking oil at some places of Imphal East district. All the benefits entitled to school children under the Mid-Day Meal scheme have been distributed till June 30 last year.
Honorariums for cooks have also been paid for up to this period, said the sources.
However, the scheme has been lift in limbo now as the Government has not been sanctioning necessary fund since July 1 last year.
Even though the ministry concerned had sanctioned around Rs 7 crore for the scheme, the State Government is yet to release the same amount.
This amount is inclusive of the honorariums to be given to cooks, the sources added.