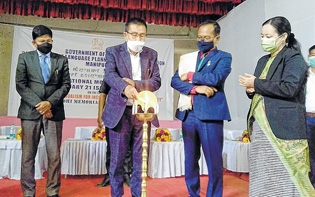 OSR and DIPR
IMPHAL, Feb 21: The State observed the International Mother Language Day under the theme “fostering multilingualism for inclusion in education and society” today. The observance was held at the Gandhi Memorial Hall, here under the aegis of the Directorate of Language, Planning & Implementation.
Speaking at the occasion as chief guest, Education Minister S Rajen Singh said that it is the duty of every citizen to preserve and protect their mother language. Every community has its own dialects or language. Also, all communities wish to preserve and protect it. The observance itself is a manifestation of preserving “our own language”, he said.
Rajen also maintained that language is the identity of a community. Manipuri language has been included in the 8th Schedule of the Indian Constitution. “We have introduced the curriculum of Manipuri language and script from lower to higher studies. The Manipuri Official Language Act, 1979 has been amended. With the new amendment after ten years, the existing Bengali script will be replaced by Meitei/Meetei Mayek,” he added.
Even though learning other languages is quite helpful, he emphasized that people should prefer/use their mother language over others. To preserve the aged old tradition and culture of the State, language should be promoted. The State is rich in art and culture. “We should always protect our identities,” he said.
Commissioner Education (S), T Ranjit Singh, Vice Chancellor, Manipur Cultural University, Prof P Gunindro and Director, Language, Planning & Implementation, Th Chitra Devi also attended the occasion as president and guests of honour respectively.
Meanwhile, the Democratic Students' Alliance of Manipur (DESAM) also observed the International Mother Language Day under the theme "Fostering Multilingualism For Inclusion in Education & Society" at its office at Kwakeithel.
HERICOUN president Longjam Ratan, cultural activist Ningthouja Lancha, research scholar at Sichuan University, China, K Chinglenkhomba Meetei and DESAM president Nameirakpam Edison attended the observance as presidium members.
At the event, DESAM secretary general, Leishang-them Lamyanba stressed on the need for promoting Manipuri language and said that the new National Education Policy has provision for teaching children in schools in local languages.
Even though the NEP has this provision, the syllabi and the curricula related to teachers’ education institutions have not been revised yet. To enable teachers effectively teach students in local/mother languages, they (teachers) should undergo necessary training at DIET (District Institute of Education and Training) centres, he said.
Cultural activist Ningthouja Lancha said the United Nations observes the International Mother Language Day on February 21 every year to promote awareness on linguistic and cultural diversity and to promote multilingualism.
He stated that (British) colonisation had affected and undermined mother languages so much that even after independence, it is still reflected in the names of the Government offices, administration, judicial and even in the banking services.
“Dependence on other languages and scripts like in the colonial days will only undermine our mother language.” To promote and preserve mother language, people should be able to communicate and transact business successfully using the mother language and script only, he said.