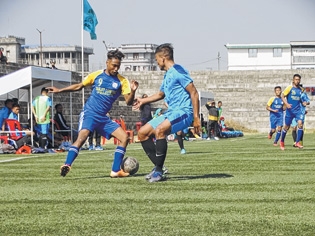 By Our Sports Reporter
IMPHAL, Feb 22 : FC Lamjao were held to a 2-2 draw by LYGSEDA, Lonpi Area today in a Group A league match of the 1st AMFA Cup which is underway at Artificial Turf, Lamlong Thongkhong.
FC Lamjao earned a 2-1 lead till the break riding to L Kisan's double but LYGSEDA staged a fine comeback in the late part of the second half to force the game to end in 2-2 draw.
L Kisan sent FC Lamjao ahead with his first strike in the 17th minute but Thangtinlen K helped LYGSEDA closed the margin by beating FC Lamjao keeper in the 24th minute.
L Kisan had his second in the 39th minute as both sides were on the hunt for the breakthrough.
Though LYGSEDA failed to level the score till the break, they were seen dominating the latter portion of the second half and successfully snatched the equaliser through B Samte in the 74th minute.
Tomorrow's matches
AMOFA, Moirang vs LYCC, Chandel; RAU vs TRUGPU