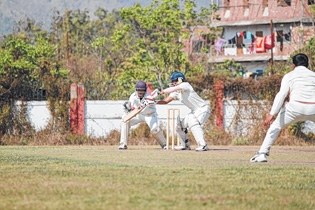 By Our Sports Reporter
IMPHAL, Feb 22 : TRAU, Kwakeithel were able to secure a 40 run victory against YWC, Langthabal for the third Group (B) stage win in the 5th MNCA W Prahlada and W Ramananda Elite Tournament 2021 today at Luwangpokpa Cricket Stadium, Luwangsangbam.
TRAU won the toss and piled up a lowly total of 175 runs in 39.5 overs losing all the wickets but were able to restrict YWC at 135 in 33.2 overs and bowlers proved their worth.
Pukhrambam Prafullomani gathered 39 runs before Bishworjit Singh Konthoujam smashed 76 off 98 balls with 8 fours and Anand Naorem scored 22 to ensure TRAU a total of 175 runs.
Pukhrambam Prakashmani Singh of YWC shone as he fetched four wickets of TRAU offering 31 runs in 8 overs which include two maidens but his efforts went in vain as their chase crashed cheaply with TRAU bowlers exerting a strong pressure by removing wickets in regular intervals.
Ngangbam Bishwash of YWC also earned two wickets in TRAU's innings.
TRAU's Anand was at his best removing four wickets alone giving 30 runs in 8 overs as Laishram Electronic Singh with 27 runs in his name was the highest run getter for the Langthabal side.
Ngangbam Bishwash (24) and Ngangbam Bingson Singh (10) were the other YWC batsmen who could muster double digit runs while the other had to depart on meagre scores.
Rajesh Patel (2/12 in 6 overs) and Birjit Kangabam (2/20 in 6.2 overs) were other TRAU bowlers who added tooth to the bowling attack and led to demolition of the YWC line up.
Anand Naorem of TRAU was named man of the match for his all round feat (22 runs and 4 wickets).
Blue Hawk CC, Khurai will play Sangai CCC, Singjamei in the next Group A league match tomorrow.