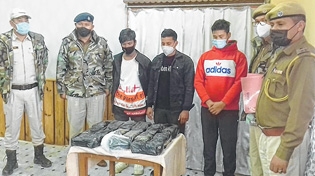 By Our Staff Reporter
IMPHAL, Feb 22 : A team of Imphal West commandos seized 1,40,000 WY tablets from two Tata trucks coming from Sekmai side while conducting a frisking and checking operation at Kanglatongbi Shantipur, yesterday.
The seized drugs is estimated to be worth about Rs 14 crore.
Speaking to media persons at the Imphal West District Police Headquarters, SP Imphal West, K Meghachandra said that the WY tablets were seized by a team of commandos led by Amarjit Singh Lamabam, Addl SP (Ops) Imphal West and   Inspector P Achouba, OC CDO/Imphal West.
The team also arrested the three occupants of the trucks namely Md Akhan (24), S/o Md Anuwar; Md Yunush @ Achouba (19), S/o Md Dilip and Md Mustakin (28), S/o Md Rahimuddin from the spot. All the three are residents of Keibung Makha Leikai, Thoubal, he informed.
The SP further stated that 1 lakh WY tablets and a wallet containing Rs 2,400, RC book and a driving license were seized from the truck bearing Assam number and another 40,000 tablets, a mobile phone and a wallet containing Rs 2,800, RC book and one driving license from the truck bearing Nagaland number.
According to the arrested individuals, the WY tablets were given to them by one unknown person sent by Md Itomba  of Keibung Makha Leikai, currently staying at Guwahati and to be transported till Guwahati.
The SP continued that arrested persons along with the seized items have been handed over to Sekmai police station for further necessary action.