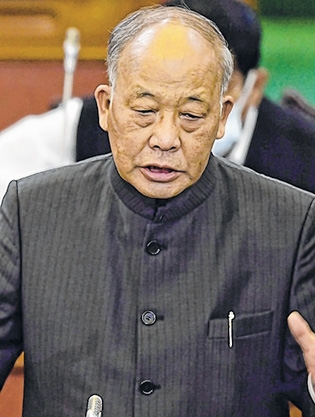 By Our Staff Reporter
IMPHAL, Feb 22: Although there is not much to be worried about the current financial year’s deficit budget, the Government needs to be very careful and meticulous, said ex-Chief Minister and Opposition leader Okram Ibobi.
He made this statement while discussing the Manipur Appropriation Bill in the State Assembly today.
Ibobi pointed out that the amount projected in the budget estimate for 2020-21 is Rs 1363 crore whereas the amount which would be utilised by March 31 as per the revised estimate is around Rs 3743 crore which means around Rs 2000 crore would be utilised above the budget estimate of Rs 1363 crore.
The State’s budget for the next financial year 2021-22 is Rs 28,000 crore. Out of this, the State is expecting around Rs 18,252 crore.
The cumulative amount of expenditure which is indispensable for payment of salary, pension, interest payment, re-payment of loan, State share for Central sponsored schemes etc is around Rs 20,000 crore.
As such, there would be a fiscal deficit of around Rs 3476 crore in the next financial year 2021-22, Ibobi said.
Deficit is not something new to the Government of Manipur and successive Governments have been facing the same problem, he said.
O Ibobi who served as the Chief Minister of Manipur for 15 consecutive years said that the Central Government is favourably inclined towards the North East region but budgetary allocations for all Ministries have been cut down.
Given this situation, all the people’s representatives, irrespective of whether they belong to the ruling parties or Opposition parties, need to join hands and focus on taking the State on the path of speedy development.
Majority of the schemes initiated by the Government of India are funded 90:10 between the Central Government and State Governments. The State Government should pay extra attention to such schemes, Ibobi said.
Even though big States do not take MGNREGS very seriously, the particular scheme generates maximum number of jobs and its budget is unlimited in a State like Manipur, he said.
Noting that there are only 52 mandays in a year under MGNREGS in Manipur, the ex-Chief Minister suggested that all concerned must join hands to raise the number of mandays in a year to at least 100.
Likewise, the budget for PMGSY is also unlimited. Even if there is no allocation for the same in the State budget, the State Government can seek substantial amount from the Centre for PMGSY works, and it can definitely make the Government’s Go to Village and Go to Hills campaigns more meaningful, Ibobi asserted.
The Thoubal Project, the Khuga Project and the Dolaithabi Projects have been inaugurated even though they are not 100 per cent complete. Now there is not a single mega project in the State which is currently      under construction, Ibobi pointed out.
He then suggested the State Government to send proposals for some new mega projects like Kangui River Project, Chakpi Project etc. to the Ministry of Water Resources.
One major burden for the State Government is non-recurring or non-plan expenditure, he said.
Pointing out that elections are drawing near, Ibobi said that the State Government may urge the Central Government to bear the non-recurring or non-plan expenditure and Prime Minister Narendra Modi may make an announcement to this effect as and when he visits the State in connection with election.
He further suggested that the State Government may ask the Central Government to fund Churachandpur Medical College in totality.
In case the Central Government agrees to the appeal, it would be a big relief to the State Government, Ibobi added.