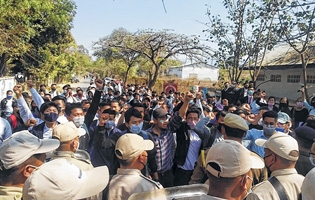 By Our Staff Reporter
IMPHAL, Feb 22 : State police fired tear gas shells in clashes with students of DM University protesting the suspension of classes at the varsity gate today.
Numerous students of the DM University took out a rally inside the varsity campus at around 10.30 am and later attempted to march towards the State Assembly through the southern gate of DM College.
However, their effort was hindered by the State police  already deployed at the area who fired smoke bombs. The students also pelted stones in response.
As the tussle intensified, the police fired six rounds of tear gas to disperse the agitating students.
It is reported that about 10 students who took part in the protest sustained injuries. They were admitted to RIMS Hospital.
The situation was brought under control at around 2 pm.
Speaking to media persons, one of the protesting students Naorem James stated that they resorted to agitation as non agreement between the college teachers and the Government regarding implementation of 7th pay has affected their studies.
He informed that the students had urged the State Government to find a solution to the pay issue before February 20 but their demand remains unheeded.
If normal classes are not resumed forthwith, the students will launch more intense agitations, James cautioned.
Claiming that the State police used 'brute' force against the students, he added that the student community strongly condemned such ‘excesses’.
James also claimed that the tentative dates for the exam have already been announced but syllabus for all the subjects is not yet covered.
The student union of  DM College of Science, Arts and Commerce has also condemned the firing of tear gas shells and smoke bombs inside the varsity campus and demanded intervention of the authority concerned to ensure such an act is not repeated in future.
Addressing a press meet at the Central Hall of DM College of Science, general secretary of the student union, Thiyam Sitaljit said that suspending classes at a time when Covid pandemic has already affected all students is truly unfortunate.
He also said that the student union might launch more agitation if classes continue to be suspended.
The officials concerned must relinquish their positions if they are unable to find a solution to the issue, he added.