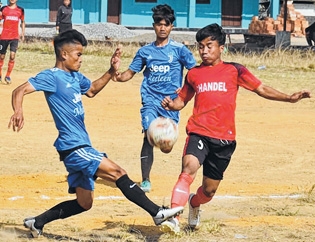 By Our Sports Reporter
IMPHAL, Feb 5 : The semi-finals line up of the ADC Chandel Trophy Super Division Football League organised by District Sports Association Chandel at Maha Union Government Higher Secondary School playground have been completed today.
Tampi FC will take on Kapaam DC in the first semi-final match on February 9 from 12 pm before Liwa Sarei YC meet Hnahringkhu YC in the last semi-final match.
In the last league match of the tournament, Liwa Khullen played out a 2-2 draw with Kapaam DC.
Kapaam DC dominated the game early on and took a slender 1-0 lead in the 7th minute. Liwa Khullen YC however drew level 10 minutes later through Lerphangam and with the two sides struggling to add more, the first half ended 1-1.
To much delight, Lerphangam struck his second goal in the 52nd minute to give Liwa Khullen YC a 2-1 lead but a stoppage time goal (90+3) by Mosha off a last ditch effort helped Kapaam DC salvage a 2-2 draw in the end.
Kapaam DC finished runners up of Group B with the result and thus qualified themselves for the semifinals.