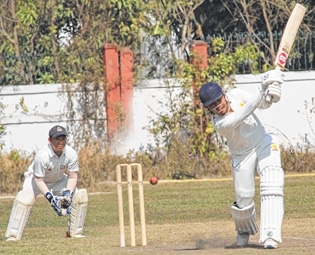 By Our Staff Reporter
IMPHAL, Feb 4 : In one of the rarest occasions, CYCLONE CC, Thangmeiband and REYS, Nagamapal played out a thrilling 139-run tie to share a point each in the Group B competition of the 5th MNCA W Prahlada and W Ramananda Elite Tournament 2021 being organised under the aegis of Manipur Cricket Association at Luwangpokpa Cricket Ground, Luwangsangbam.
Asked to bat first, CYCLONE CC slumped to 139 runs losing all the wickets in 35.5 overs before Nongmathem Suraj picked up two wickets in the last over to force REYS end innings with score level at 139 for 10 in 39.5 overs.
With REYS bowlers and fielders making a concerted effort, CYCLONE CC had to face a torrid time. Though wickets kept falling, Narsingh Yadav (16), Longjam Ronald (25), Thoudam Akshaykumar (15) and Bikash (32 not out) batted sensibly to keep the scoreboard ticking till 139.
It was Tenyson who helped REYS prevent CYCLONE from making a big total by removing three lower order wickets in his spell of 7.5 overs after Robertson removed two crucial wickets including Narsingh Yadav and Thoudam Akshaykumar. Ningombam Jackiechand and Jitendra Bishan Thakur also scalped two wickets each in this innings to keep CYCLONE CC under pressure.
In the chase, REYS lost two wickets for 9 within 3.5 overs but Tenyson who impressed all with his bowling kept their hope alive by smashing a half century (62 off 91 balls).
The innings however took a new turn after Tenyson's departure when REYS were at 102 in the 28.4 as CYCLONE bowling attack led by Nongmaithem Suraj started to gain control towards the end. REYS were reduced to 125 for 6 in 33.6 over with Suraj sending off Laishram Robertson on 20 before Nongmaithem Ajit got lbw out to Kambrambam Homendro in 4th ball of the 37th over with 130 runs in REYS tally.
Suraj then bowled out Rishikanta on 3 in the 1st ball of the 38th over for the second wicket and trapped Leishangthem Bishorjit and Ningombam Jackiechan Singh on lbws in the last over (40th) to complete his for wicket haul and averted REYS from earning first win of the competition. Akoijam Tenyson who struck 62 and fetched 3 wickets for 31 was adjudged man of the match.
With the result, CYCLONE CC remain on top with 3 points from two matches while REYS are fourth with a point from two matches.
CHAMP CC, Khagempalli will play Blue Hawk CC, Khurai tomorrow in a Group A league match at the same venue.