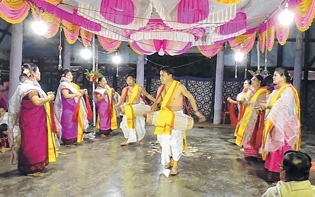 Rekha Konsam
On the 17th of January 2021, I was fortunate to witness a Basak (Utkantha) performance by a group of women, the Kongpal Nupee Ishei Marup, an organization that has its roots as a neighbourhood group or ishei marup.
The occasion was my first time attending a full Basak performance. Reference to such performance goes back to childhood days, particularly the kang (rath) festival, but at the time it always seemed to go together with khubak ishei and I never could distinguish the two neither did I ever get to watch the performances for more than a few minutes. References to Basak did often come up, however it was not in context to performance per se, rather it was usually in reprimands to admonish an unheeding child of the repeated words by an elder/parents.
Curiosity led me to a hunt for lexicon. The dictionary gives three possible meanings to the term ‘Basak’ – (a) a plant whose scientific name is gendarussa vulgaris; (b) fragrant flowers and (c) bed chamber. The term ‘utkantha’, on the other hand, meant yearning for the loved one.
In essence, the theme of Basak performances are the nocturnal rendezvous of Radha and Krishna. The settings of these meetings are imagined as filled with fragrant flowers of various kinds. In the Vaishnava philosophy of Krishna worship, the divine love of Radha-Krishna is the bedrock of the bond of love between the worshipper and the worshipped.
In Manipuri Vaishnavism, this bond is most eloquent in its devotional performances for it is one form of Hinduism which is practice oriented. There are no ‘audiences’ in such devotional performances because everyone is a participant and each is in an emotive state fuelled by bhakti prem to experience the joy of being one with that larger expanse of prem sagar (nungshibagi ipak).
Basak is one such devotional performance within the Nat Sankirtana tradition. It is an expansion of Raslila. Based on the Lord Shri Krishna’s Niti lila, Basak performances are centered on the theme of Radhika’s meeting of Shri Krishna at Nivitwa Nikunjavan. Radhika lovingly decorates a floral chamber at Nivitwa Nikunjavan with fragrant flowers and waits for Shri Krishna but he fails to make appearance for he is busy visiting other gopis. Radhika’s initial anxiety at his non-appearance turns to anger and, in her anger, she wreaks the lovingly arranged flowers. Her friends (sakhi) run helter-skelter searching for Krishna. They finally caught up with him at Chandravali Kunj. He is told of Radhika’s anger and brought back to her. Seeing her beloved, Radhika’s anger slowly wanes and they then play Basak together.
In the practice of Manipuri Vaishnavism, there are different types of Basak performances such as Bipralabdha, Khandita, Utkantha, Kalhantarita, Proktak, Bhatika, etc. These are different segments within the same broader theme. The Utkantha segment specifically focusses on Radhika’s distress and deep pangs of yearning for her beloved Krishna at Nivitwa Nikunjavan.
As much as it is thematically based in religion, what is interesting is the exploration of emotions in the singing performance–the emotions of love, longing, expectation, anxiety and finally reunion. These emotions are relatable in the lives of every person in varying degrees.