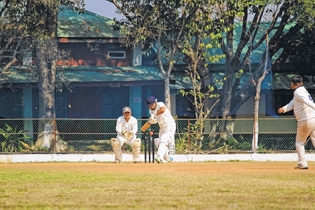 By Our Sports Reporter
IMPHAL, Feb 7 : Mutum Sudhir blasted off a brilliant century (143 off 115 balls) to help RCT, Malom cruise to a 211 run victory against IBSA, Yumnam Leikai today in a Group A encounter of the ongoing 5th MNCA Plate Tournament staged at Model Higher Secondary School and Oriental College playground.
Nongthombam Denin also shone for RCT with a blistering knock of 73 runs in 30 balls and Chabungbam Ishworjit added 45 runs to help the team set a mammoth total of 327 runs at the cost of 4 wickets in 40 overs.
In the chase, IBSA had a horrible start and slumped to 116 all out in 31 overs as Nongthombam Sarojkumar and Jay Singh Hourakcham scalped three wickets to rattle across IBSA's batting line up. Adding to the attack, Nongthombam Denin and Nickel Loukrakpam shared the remaining two wickets each. Rajiv Dey with 40 runs in his name was the only significant contributor for IBSA in the chase.
It was RCT's fourth win, having beaten TCMDC, MUVANLAI and UCC in the previous matches. The win also assured them a place in the quarter finals.
M Sudhir was eventually named man of the match.
Meanwhile WYC, Thoubal Wangkhem eked out a narrow 10 run victory in a competitive group C encounter against PTCC, Patsoi Part III at Langthabal Public Ground for the third stage victory.
WYC, electing to bat first, piled up a total of 177 for 9 in 35 overs and held PTCC all out for 167 in 34.5 overs.
Wangkhem Samungou 19, S Herokumar 25, Priyobarta 24, Huidrongbam Biteshwor 39 and Laishram Rajesh 18 not out, were the main run gatherers for WYC today in their innings where in Dominic Moirangthem, Sohail Akram, Thangjam Mohc and John M Hmar  of PTCC earned two wickets each.
The target looked chaseable till late as Hijam Hemachandra 23, Yambem Kaikuyamba 34, Andyroshan 24 set a commendable momentum before Dominic Moirangthem anchored with 35 not out. But as wickets on the other end kept falling within short intervals, they bundled out on 167.
Laishram Rajesh was the most successful bowler of the Thoubal Wangkhem side with three wickets in his name as Sougrakpam Shangkar and Thoudam Roshankumar Singh bagged two wickets each.
Rajesh was adjudged man of the match for his all round performance (18 runs and 3 wickets).
Elsewhere in the Group D league match staged at Moijing playground, KASC, Khomidok chased down the 108 run target set by NAPSA to secure their third win in four matches. It was the fourth consecutive defeat for NAPSA in the tournament.
Asked to bat first, NAPSA bundled out for 107 all out in 26.2 overs and KASC eclipsed the target on 110 in 24 overs with 5 wickets left to spare.
Tongbram Dhanakuber made the most score for NAPSA with 35 runs as other batsmen fell easy prey to Md Farijuddin (3/25 in 8 overs), Md Anjum (3/15 in 5.2 overs) and Md Babu (2/20 in 6 overs). Prinobata Thokchom 36, Md Arif 26, Md Farijuddin 8 not out and Md Babu 15 not out completed the chase with ease.
Md Farijuddin who produced a stellar bowling performance was named man of the match.
Tomorrow's matches
YWC-P vs KCC at Moijing playground; PSC vs KSDO at Oriental College ground and ESU vs SDC at Langthabal Public Ground.