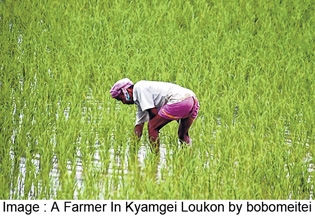 Professor N Mohendro Singh
When the whole world talks about fourth Industrial Revolution, and when the whole world talks about new Agriculture Revolution as engine of growth, basis of industrialization and as potential provider of environmental services, we are talking about food deficit in Manipur. All advanced countries come to this present competitive stage mainly through fast agricultural growth.
Let us recapitulate the fact that tourism largely introduces the economy, industry strengthens, agriculture stabilizes and ecology beautifies. Looked at from the modern concept of tourism of ‘see,feel and admire’, the tourism sector of Manipur has doubtful prospect. What is there in the State to admire ? In the absence of social entrepreneurship and social engineering, the tourists normally may not feel like visiting again. We know how to speak; but not how to talk.
The development experiences of Manipur have established the hard fact that industrialization in the real sense may not be possible in the State which remains visibly plagued and crippled by the conspicuous lack of both physical and social infrastructures. Militant conservatism is another issue. The small State is struggling hard to be liberated from the clutches of burden of history and hurdle of politics. The expansion of National Highways being undertaken at the moment, perhaps marks a new beginning of infrastructural development.
The rising trend of commercial engagements in recent years could be a hopeful beginning of the end.
Well, what about agricultural sector which is said to be engine of growth ? It does practically bad.  85% are marginal and small farmers. The Average Size of Holding is only 1.14 Hectare. Man land ratio (Hectare\ person) is only 0.87. The size handicaps, cost disabilities, the absence of proper irrigation and lack of marketing infrastructures remain threatening. Only 30% to the total area under paddy is irrigated while water is more than gold to the farmers. It is not a surprise that marketable surplus is extremely low while large marketable surplus, wholesale marketing and economies of scale normally go together. At the moment the rate of adjustment and transformation is very limited. It is not a wonder that ‘about 60% agricultural household and 64% non-agricultural are indebted’ (NABARD). The rate and pace of adjustment and innovation is too low to transform the agricultural economy in the State with the same input and output.
Economic self-sufficiency without food self sufficiency is a wishful thanking and may ultimately turn out to be a source of disillusionment. The gap between demand and supply remains wide with a shortfall of 108 thousand tonnes even after 68 years of economic planning in the State. “Paddy production has to be increased by atleast 25% from the present level of production of 2837 kg\ Ha” (NABARD).
What about doubling farmers incomes by 2022 ? According to Dalwai Committee, set up to examine the vision, to double farmers income in 5 years, we require compound annual growth rate of 14% while the present scenario tells us of 4% only.
Now, if Manipur is really interested in doubling, let us prepare Action Plan for doubling (a) income from crop cultivation, (b) income from fishery and animal farming and (c) income from non-farm businesses. Right now 70–80% of income is from within agricultural activities. We have to re-organize Incentives, Investment and Institutions (III).
At the moment we are facing 2–Great Monsters namely monsoon and market. Heavy rainfall means heavy flood and huge loss in the absence of long-term strategic plan of action to harvest the ground water. There is a great need for a home–grown strategy.
Market is another issue. The increasing externalization of internal capacities of farmer in respect of availability of labour, seed and manure and also of sale of output is the root cause of production at decreasing rate. We are handling the rural economy in the State with 119 Rural Periodical Markets (RPM) without a single wholesale market. The market imperfections are so acute. The farmers are victimized.
Tripura does much better with 21 wholesale markets while Nagaland and Arunachal Pradesh are conducting equally good with 19 and 13 respectively.
Today Manipur needs positively the PRODUCTIVITY REVOLUTION OF SMALL FARMERS with appropriate focus on TOP (Tomato, Onion and Potato). Because “horticulture increases return on land 10 fold” (WDR – 2008).
In view of age–old culture of exceptional efficiency of farming occupation, the declaration of Toubul, Khoijuman and Kwasiphai in Bishnupur C.D. block as Special Agricultural Zone could certainly be a prospective strategy to carry forward the productivity revolution.
An Advisory Committee consisting of experts could be a new institutional strength to steer the stages of the revolution. What we need is a changed institutional mindset to act as Friends of Farmers.
What is required in Manipur is a new strength of profound emotional attachment to farming community with a concrete plan of action to address the deep seated economic grievances and social neglect.
The writer was Professor of Economics, Manipur University