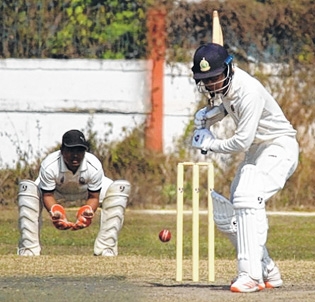 By Our Sports Reporter
IMPHAL, Feb 8 : PTRC, Patsoi Part IV registered an emphatic 114 runs victory against YWC, Langthabal for the second win in the Group B campaign of the 5th MNCA W Prahlada and W Ramananda Elite Tournament which is being underway at Luwangpokpa Cricket Ground, Luwangsangbam.
YWC had to rue their decision to let PTRC bat first as they slumped to 48 all out in 14.5 overs in the chase though the latter team set a modest target of 163 runs losing 8 wickets in 35 overs.
Despite YWC bowlers putting in a concerted effort and removing Khangenbam Santosh early on 7 reducing PTRC 19 for 1 in 5.4 overs, Ngariyanbam Johnson struck an unbeaten half century (55 off 59 balls)  to make it 162 for 8 at the end of their innings after forging a 55 run partnership with Jotin Thokchom (32) in the 5th wicket stand.
Thokchom Kishan (2/24), Puinachan-dra (2/28) and Maibam Subash (2/46) put in commendable efforts to hold PTRC from making a big total as L Dinachandra and Pukhrambam Prakashmani fetch a wicket apiece.
The Langthabal side then had their worst chase as both the openers Laishram Electronic and Jiko Sorokhaibam departed on ducks within three overs before remaining orders were too dismissed on paltry single digit scores as Rajkumar Rex (3/16 in 5 overs), Bishworjit Singh Konthoujam (3/9 in 4 overs) and Chingakham Bidash (3/13 in 2.5 overs) wreaked havoc across the batting line to en route to their respective three wicket hauls.
Ngangbam Maheshkumar with 8 runs was the topscorer for the Langthabal team today.
RK Rex who led the bowling attack for PTRC was eventually named man of the match.
The win also helped PTRC stay atop in the Group B table with 4 points. CYCLONE CC are second with 3 points from two matches.