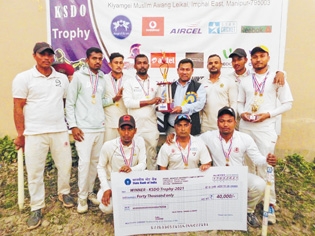 By Our Sports Reporter
IMPHAL, Mar 18 : XI-Twister, Kiyamgei has emerged champions of the 4th State Level Open Tennis Ball Cricket Tournament 2021 organised by Kiyamgei Social Development Organisation (KSDO), defeating  Blades, Kongba by 7 wickets.
Blades Kongba won the toss of the final match played at KSDO ground on Wednesday and elected to bat first.
In the first innings, XI-Twister's bowlers showed its strength and dismissed all opponents' wickets in 14.5 overs with just 81 runs to chase.
The highest scorer of the first innings was Sanjit who hit 21 runs off 16 balls while Samir and Lakimbur of the Kiyamgei side clinched 3 wickets each.
Though the Kongba side made every effort and fell some early wickets , it was XI-Twister which came out better as they chased the target in 12.2 overs with 3 wickets down.
XI-Twister's Zalli who struck 47 runs off 31 balls was declared the man of the final match.
The closing ceremony was held in the presence of Lilong AC MLA Y Antas Khan