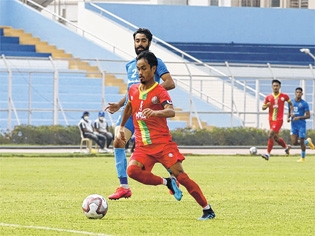 KOLKATA, Mar 21
Ghanaian forward Dennis Antwi’s brilliant brace helped Gokulam Kerala FC (GKFC) record a 2-1 win over Mohammedan Sporting in a I-League championship round match at the Kalyani Stadium on Sunday.
GKFC totaled 26 points to tie with Tiddim Road Athletic Union (TRAU) and Churchill Brothers, but leapfrogged both on better head-to-head results to take the top spot.
All three teams will be in contention for the title during the mouthwatering last round on Saturday (March 27).
GKFC played with purpose and Antwi drew first blood when he chested down the ball inside the box and turned to his left to shoot home in the 19 minute.
Antwi again showed his class when he shot from a tight angle to beat goalkeeper Priyant Singh between his legs in the 33 minute.
Sporting played better in the second half as substitute custodian Zafar Ali Mondal made some excellent saves and the forward line created chances. Sujit Sadhu’s 85 minute header put GKFC under pressure but the green shirts managed to hang on to their lead.
In an early kick-off, TRAU and Churchill Brothers played out a 1-1 draw at the Kishore Bharati Krirangan in Kolkata. Churchill Brothers had the lead via a penalty kick converted by Luka Majcen in the 28th minute but it was cancelled out for TRAU by Phalguni Singh in the 43rd minute.
Both teams failed to capitalise on second-half chances and eventually shared a point each.         Agencies