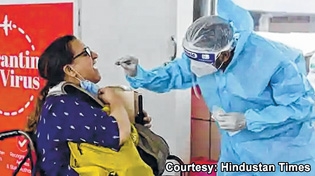 New Delhi, Mar 22
As India stares at the second Covid wave, 46,951 fresh coronavirus cases in the last 24 hours - biggest single-day jump since November 7-took the country's tally to 1,16,46,081 total infections, the Government data this morning showed. Of these, over 1.11 crore people have recovered so far, and 1,59,967 total deaths have been recorded. In the last one week, India has seen the sharpest surge in fresh infections in nearly four months after the spread of virus had seemed to slow down. Restrictions have returned in several parts of the country as Government and experts say violation of protocols is leading to surge in cases.
Here is your ten-point sheet on this big story :
Maharashtra, which has logged the highest number of cases in India since the start of the pandemic, yet again saw its biggest single-day jump in fresh cases. 30,535 new infections on Sunday took the tally to 24,79,682. With 3,775 new infections, Mumbai, the country's financial capital, also saw the highest-single day cases.
Punjab (2,644), Kerala (1,875), Karnataka (1,715) and Gujarat (1,580) were the other four States that saw the highest number of infections across the country in 24 hours, as per the Health Ministry data.
Restrictions have returned to several parts of the country. In Rajasthan, the State Government has announced a night curfew from tonight in eight worst-hit cities, including Jaipur, Udaipur and Ajmer. Markets will remain closed after 10 pm.
In Maharashtra, an 11-day curfew has been announced in Nanded to slow the spread of virus. In Nagpur, restrictions have been extended till March 31; restaurants and eateries can operate till 7 pm while shops can remain open till 4 pm, and all offices--private and Government--can function with 25 per cent staff.
Amid spike in cases in the National capital, a meeting has been called by the Delhi Disaster Management Authority or DDMA this afternoon. The city saw a surge of 823 cases on Sunday, taking the tally to 6.47 lakh total cases.
In the last 24 hours, 212 deaths - linked to COVID-19 - were recorded in India, the highest since January 9 when 228 deaths were reported in a single day.
Large crowds and mutant strains may be behind Covid surge in India, AIIMS chief  Dr Randeep Guleria has told NDTV. "There is a loss of Covid-appropriate behaviour. Now people feel that the pandemic is over because vaccines are here. So they fail to wear masks. We see large crowds gathering - again without masks. Many of these crowded events have become super-spreading events," Dr Guleria told NDTV in an exclusive interview.
The Government has told Uttarakhand to follow stringent measures to control the spread of COVID-19 during Kumbh Mela, an annual gathering of pilgrims. "It has been noted that there is a potential of an upsurge in cases in the local population after the auspicious Shahi Snan days during the Kumbh Mela," the Health Ministry said in a statement. India is witnessing a surge in cases ahead of Assembly polls in four States and one Union Territory which begin on Saturday. The Government is also trying to speed up the vaccination drive.
Worldwide, over 12.3 crore people have contracted the virus so far; 27 lakh people have died. NDTV