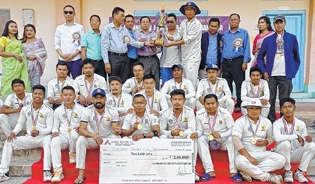 By Our Sports Reporter
IMPHAL, Mar 23 : Kishan Laishram shone with both the bat and the ball as CYCLONE, Thangmeiband beat PTRC, Patsoi by 6 wickets for the title of the 5th MNCA W Ramananda and W Prahlada Elite Tournament 2021 today at Luwangpokpa Cricket Ground, Luwangsangbam.
PTRC won the toss and were all out for 154 runs in 37 overs with CYCLONE bowlers rattling across their batting line up and the Thangmeiband team went past the target with 6 wickets left in hand in 36.3 overs.
After Ngariyanbam Jameson fell to K Homendro on 20 and Loktongbam Santosh on 5 to N Suraj Singh leaving PTRC 43-2 in 11.5 overs, Khangembam Santosh stood like a wall for some time but was caught out on 40 as his shot went straight to waiting hands of bowling Laishram Roshan Singh.
Khangembam Santosh emerged the highest run-getter for the Patsoi side as RK Rex and Ngariyanbam Johnson departed on 15 and 20 runs respectively before Kishan Laishram trapped Jotin Singh Pheiroijam lbw on 21, sent out Abit Hijam on 2-ball duck and Shapam Kenjit Singh on 1 to finish with a best bowling figure of 8-0-31-3.
Kabrambam Homendro Meitei and Nongmaithem Suraj of CYCLONE finished with two wickets each and Bikash Singh grabbed a wicket.
Chasing 155 for the win, CYCLONE lost Jenpu Kamei early to RK Rex on 3 but Narsingh Yadav (40 off 47 balls; 5 fours) found a good partner in Longjam Ronald (23) and repaired the early damage.
After Narsingh's departure, Kishan Laishram took charge of the chase and struck four boundaries en route to his unbeaten 33. Kishan's partnership with Bikash Singh (18 not out) coupled with 21 extras offered by PTRC was more than enough for CYCLONE to seal the game. The result could have been a bit different had the Patsoi team were careful about spilling extras.
RK Rex was the best bowler PTRC had today as he finished with 2 wickets for 18 runs in 6 overs which contained a maiden while Kiran Laishram and Shapam Kenjit Singh managed a wicket apiece.
Laishram Kishan was eventually adjudged man of the match and earned a cash prize of Rs 5,000.
Winners, CYCLONE walked away Rs 2 lakh richer as PTRC content with Rs 1 lakh and a trophy.
Semi-finalists, FORCE and CHAMP, were also encouraged with a cash prize of Rs 50,000 and certificates.
Other winning individual prizes include Pheiroijam Jotin Singh of PTRC (Man of the series : 150 runs and 12 wickets in 7 innings : Rs 15,000 cash prize along with certificate and trophy), Narsingh Yadav of CYCLONE (240 runs in 5 innings : Rs 10,000 cash prize along with certificate and trophy) and Abdul Kasim of FORCE (Highest wicket taker : 18 wickets in 6 innings : Rs 10,000 cash prize along with certificate and trophy).
Match referee, Irengbam Ibobi Singh and scorers, Ayekpam Himat Singh (manual), Maibam Rakesh (online) and Khagokpam James (scoreboard) were also feted with certificates and trophies during the closing function of the tournament.