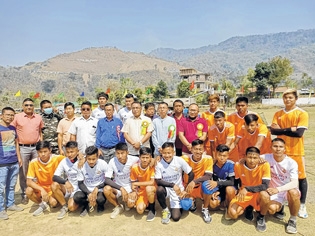 Our Correspondent
Noney, Mar 23 : The 1st LBYC Open Knock-Out Men's Volleyball Tournament kick-started today at Longmai Common Ground Longmai-3, Noney district HQs.
The tournament was opened in the presence of Gaiduan Kamei, executive member of BJP Manipur; Kasaigai Gangmei, chairman, Longmai Village Authority and Namthuangong Kamei, secy Longmai Bazar Board & advisor of the organising Youth Club graced as presidium members.
Speaking at the occasion as the chief guest, Gaiduan Kamei stated that Manipur has been recognised as the 'powerhouse of sports' and as such India Government has allotted a National Sports University in the State.
With the University, people in both hills and the valley will get an opportunity to develop more in the field of sports, he said.
Maintaining that it is high time for all to focus on sports and education, Gaiduan further said that people in both the hills and valley need to do away with negative thinkings and join hands together to usher in a unified, peaceful, develop and prosperous Manipur.
The tournament which will run till March 26 is being participated by 12 teams from across Imphal Area, Khoupum, Nungba and Noney Area.
Leaders from nearby villages, clubs, organisations, CRPF officials and others also graced the opening ceremony which was marked by a cultural dance by Longmai-1 Youth Club and a special song presented by famous singer James Riamei.
In opening day matches, Noney Police team beat AMSA; Awangkhul beat Noney Peaceland and Taodaijang beat Noney Forest B-Team.