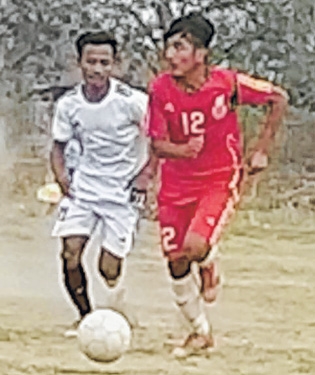 By Our Sports Reporter
IMPHAL, Mar 24 : UBSA, Mantak cruised to a 6-2 win against LYA,  Wangoo for three wins on trot and to finish Group B winners in the 19th Ksh Leihao Devi Memorial Super Division Football League 2021 organised by District Sports Association Kakching at DSA ground.
In the final Group B league match, UBSA dominated the game thoroughly and were 4-1 ahead till the break riding on Md Ruhit's double.
It took only one minute for UBSA to break the deadlock as Md Ruhit was quick to beat the LYA keeper who was caught by surprise. S Chungmunlen then struck the UBSA's second in the 17th minute to pile up more pressure on the Wangoo team.
Md Ruhit then made it 3-0 with a fine strike in the 21st minute before L Munriichung added further woes to LYA by scoring UBSA's fourth goal two minutes later.
LYA did manage to pull back a goal in the 30th minute before Md Aitao scored the team's second to reduce the gap in the 40th minute. LYA's hope to further close in the margin vanished with S Ngamneiril finding the target in the 63rd minute and N Kaba netting the final goal in the 68th minute.
Earlier in the day, SAO Kakching relied on a stoppage time goal to beat SWC, Waikhong 2-1 and remain in fray for the tournament title as Group B runners up.
P Babul earned SAO the lead in the 10th minute in this evenly matched game before Y Tomba hit the equaliser for SWC in the 40th minute to make it 1-1 till the break.
The two sides toiled hard to find the headway as winners would qualify for the final league round until S Justin made a last ditch effort during the stoppage time count (80'+1') and handed SAO the much needed win.
Group B winners, UBSA and runners up, SAO will now meet Group A winners, JA and runners up, SWC, Keirak in the final league round.
The 3rd and 4th placed teams on the other hand will play knock-out round on March 26.