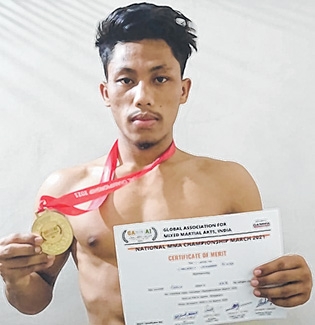 By Our Sports Reporter
IMPHAL, Mar 26 : Laishram Chourajit of Manipur clinched a gold medal from the Mixed Martial Arts National Open Championship which was held from March 23 to 26 at Fiton Sports in Bangalore under the auspices of Global Association for Mixed Martial Arts India (GAMMAI) .
Chourajit, son of Laishram Ibochouba of Thinungei Ward No 6, won the gold medal in the feather weight category (65-68 kg) by beating Mairidin Newmai from Nagaland in the final after impressive wins in three previous fights.
Based on his feat, Chourajit, a trainee of RMX Mixed Martial Arts and Fitness, has also been selected in Indian team for the GAMMA Asian  Championship to be held in Issyk-Kul, Kyrgyzstan in the month of July.