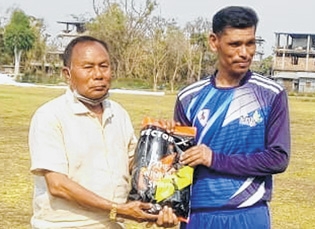 By Our Sports Reporter
IMPHAL, Mar 27 : LCCC and YWC Langthabal prevailed in today's matches of the 5th T Subol Memorial Veteran T20 Cricket Tournament being organised by Manipur Veteran Cricket Association.
The first match of the day was played between YWC and OSCAR, Paona Bazar, wherein the former beat the latter by 44 runs.
In this group B encounter at Langthabal public ground, YWC opted to bat first and posted a target of 167/4.
Naobi (52 off 56 balls) and Jediba (45 off 22 balls) were the highest run takers of the Langthabal side. The first innings also saw OSCAR's Joysangkar dismissing 3 wickets.
In the chase, OSCAR was bundled out at 123 in 18.4 overs, with a superb performance from YWC bowlers.
YWC's Samananda who dismissed 3 wickets and hit 20 runs off 9 balls was named man of the match.
In another match (group A) played today, LCCC defeated  CHAMP CC by wickets.
CHAMP CC which chose to bat first hit 144/4 in the given overs. Sanjoy (not out) hit 58 runs off 34 deliveries is the notable batsman of the first innings.
The target set by CHAMP was successfully chased by LCCC with just 4 wickets down.
LCCC's Krishna who hit 63 runs off 33 balls and dismissed 1 wicket was declared man of the match.