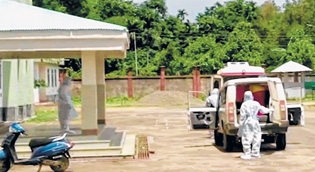 By Our Staff Reporter
IMPHAL, Mar 7: Days after an Aganwadi worker died post Covid vaccination, another Angnwadi worker who had recently received the first shot of the vaccine died yesterday.
Shockingly, her last rites have been performed without conducting a post mortem of the corpse. And as such, the actual reason for the death is not known.
The female Aganwadi worker identified as Than-sing Hmar hailed from Tui- sholen village in Borobekra sub-division, Jiribam district. She died on the way to Silchar Medical Hospital from Silchar Valley Hospital yesterday.
She received the first dose of the Covid vaccine on February 17 at Goakhal Primary Health Centre. She had developed fever during the night of the same day. After consulting doctors, she rested at home for some days before she was evacuated to Jiribam Hospital in an ambulance on February 27.
She was further taken to Alipur Hospital, Cachar in Assam on March 1  and then referred to Silchar Valley Hospital on March 4 as her health conditions did not improve. She was then taken to Silchar Medical Hospital, Gungoor yesterday but succumbed on the way.
Her corpse was deposited at Jiribam morgue and after Jiribam administration talk-ed with the family members, the body was taken to her village and last rites were conducted today. It was agreed that her next of kin would be appointed as an Anganwadi worker .
Notably, a female Anganwadi worker from Bishnupur district had died and she was the first victim to die after COVID-19 vaccination. She had reportedly developed rashes after days of vaccination.
Meanwhile, 2,940 people were vaccinated against COVID-19 yesterday even as the number of active cases in Manipur has declined to 28, said Govern- ment COVID-19 Common Control Room today.
The report issued by Additional Director (Health) Dr Khoirom Sasheekumar Mangang said three persons including two males and one female tested positive for Covid while six recovered from the disease in the last 24 hours.
The total number of Covid positive cases has reached 29,291 while the total number of recovered cases has climbed to 28,890 with a recovery rate of  98.63 per cent.
With zero deaths due to Covid in the last 24 hours, the death toll remains at 373, said Government report.
Meanwhile, the three fresh infections were detected at testing facilities at JNIMS, Babina Diagnostics and Churachandpur. They hail from Imphal East, Imphal West and Churachandpur districts. All necessary precautionary measures like containment and contact tracing are in place, said the report.
The report further informed that the total number of people vaccinated against Covid till yesterday is 68,405 including 30,368 healthcare workers.
The cumulative number of Covid positive cases is 29,291 including 25,857 civilians and 3,434 Central security personnel. The cumulative number of recovered cases is 28,890 including 25,461 civilians and 3,429 Central security personnel. The number of active cases is 28 including 27 civilians and one Central Security personnel.