Classic Grande is now a member of Radission Individuals 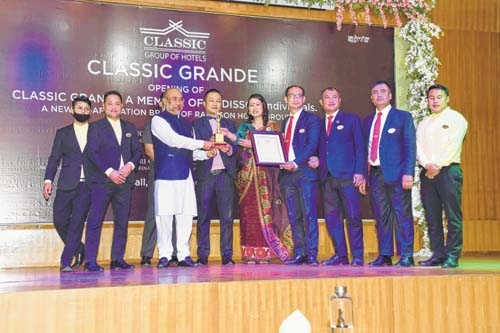 Imphal, Mar 8 (DIPR) : Chief Minister N Biren Singh graced the formal opening of Classic Grande, Chingmeirong as a member of Radisson Individuals.
With this, Classic Grande has become the first hotel launched under the Radisson Individuals banner in India.
On the occasion, N Biren congratulated the Classic Group of Hotels in achieving the milestone.
He said that the State Government is giving thrust to the tourism sector for economic growth and it requires good hotels for accommodation.
Earlier, the State did not have proper accommodation facilities for visitors. However, when the first Classic Hotel was launched, everybody felt proud of it, the Chief Minister said.
Stating that entrepreneurship has started making headway in the State with large number of youth getting into it, the Chief Minister stated that the Government has also been helping them with the introduction of StartUp scheme.
Observing that people should always apply mind to become job creators and not only job seekers, the CM contended that the State Government would extend all possible assistance to any group in opening the first 5-Star hotel in the State.
Tourism Minister O Lukhoi, MLAs RK Imo, Dr S Ranjan and Chief Secretary Dr Rajesh Kumar were also present at the occasion.
In his speech, O Lukhoi said that it was a proud moment not only for Classic Group of Hotels but for the State as a whole.
Stating that the group under the leadership of its Managing Director Dr Th Dhabali has been able to expand business in diverse sectors, he said that the group deserves appreciation for giving jobs to hundreds of people.