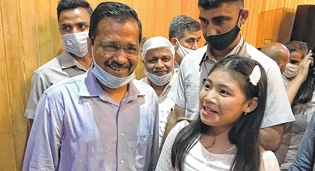 NEW DELHI, Mar 9
Nine years old Indian climate and environmental activist Licypriya Kangujam has been honoured with International Women’s Day Award 2021 by Delhi Commission for Women, Government of Delhi in recognition of her efforts towards empowerment of women and for being an inspiration for the country in the field of environment. The award carries a cash prize and a seal.
Around 50 people, including men, women and transgender people from across India were felicitated on International Women’s Day on Monday by Delhi Commission for Women.
While Licypriya was the youngest and the only recipient of the award from North-East, those awarded include a 75-year-old woman farmer, Mohinder Kaur (75), Captain Tanya Shergill, the first woman to have led military parade on Republic Day this year and Captain Bhawna Kasturi, first woman to lead an all-men army contingent in the RD parade.
Others include ISRO’s women scientists who worked on Chandrayaan 2, acid attack survivor Laxmi Aggarwal, Late Mahender Singh who was lawyer of Unnao rape survivor, family of martyred 21-year-old jawan Sardar Gurtej Singh, professional golfer Deeksha Dagar and wrestler Neetu Sarkar.
Addressing the award ceremony, DCW Chief Swati Maliwal said, “Delhi Women's Commission has done unprecedented work in the last five years, handling over one lakh cases and attending more than 4.5 lakh calls on the 181 helpline number. The commission has rescued many girls and women from different places.”
At the event, Chief Minister Arvind Kejriwal commended DCW for being the “only women’s commission in India that is known for its work”. He added, “Delhi is the only State that has provided free bus service for women, deputed security marshals in each bus and installed CCTV cameras on the streets across Delhi. While making any administrative decision, Delhi Government keeps in mind the welfare of women and girls.”
Licypriya also urged the Delhi Chief Minister Arvind Kejriwal to include Climate Education as a compulsory subject in all schools of Delhi during the function and Kejriwal assured her the same.
In her award speech, Licypriya stated that she also faced lots of threats, online abuse and cyber-bullying everyday to silence her voice but she never stopped. She urged every woman and girl child to never ever give up until they reach their goals.  She added “our little things can make a huge difference”.
It may be noted that Licypriya has been championing her cause since she was six-years-old to protect, preserve and nurture the environment by fighting climate change. She is one of the youngest climate activists globally and has addressed the world leaders in the United Nations Climate Conference 2019 (COP25) in Madrid, Spain calling on the world leaders to take immediate climate actions to save their future. She is an outspoken young leader inspiring millions of people around the world and one of the leading voices on climate change in the world despite her young age.
She was even praised by United Nations Secretary General Antonio Guterres as “8-year-old Licypriya is the reminder of the world's obligations towards future generations” in 2019.
She has spoken in over 400 institutions and other platforms in over 32 countries advocating adults about the threat of climate change as a part of her movement. She has planted over 3.5 lakh trees under her initiative “Monday for Mother Nature”, a mission to plant one million trees every year.