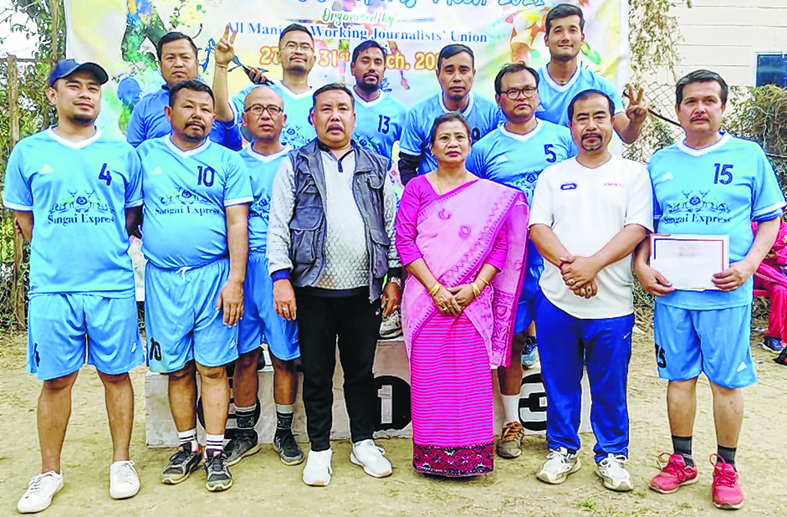 By Our Sports Reporter
IMPHAL, Mar 31 : The Sangai Express were crowned volleyball champions at the 11th Journalists' Sports Meet organised by AMWJU at Khuman Lampak Sports Complex.
The Sangai Express defeated team Evininger in straight sets on March 28 to earn top honour of the volleyball competition this year.
In the quarter final match, The Sangai Express beat ISTV and got the better of Media Unified in the semi-final to earn the final ticket.
Th Kishan also earned two gold medals to ensure The Sangai Express remain second in the medal tally of the sports meet.
Th Kishan bagged his first gold medal in the discus throw event for men by recording a maximum distance of 25.04 m and the other in the shot put event with a best throw of 9.61 m.
With 27 medals, ISTV are well ahead of all media firms and on the brink of lifting the overall champions title this year. ISTV swept the medals in the men's and women's 100 m race, 400 m race, long jump, table tennis and badminton. ISTV women athletes also swept the discus throw and shot put medals to propel the media house to the top of the medal tally.
Meanwhile, TOM TV emerged football champions as they defeated ISTV by a slender 1-0 margin in the final match staged yesterday at Artificial Turf, Lamlong Thongkhong.
Cricket tournament is the only event left to be conducted as inclement weather conditions have forced the organisers to defer the event.