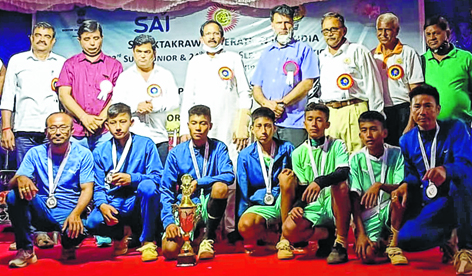 By Our Sports Reporter
IMPHAL, Mar 31 :  Though Manipur Sub-Junior boys had to settle for the runners up title in regu event, State's doubles team bagged top honour in the 23rd Sub-Junior and 24th Junior Boys and Girls National Sepak Takraw Championship hosted by Goa Sepak Takraw Association at Fatorda, Margao.
Manipur, who have been an indomitable force for several decades in the history of Indian Sepak Takraw, lost 21-18, 19-21, 20-22 to Bihar to finish regu event's runners up.
Earlier in the quarter final, Manipur beat Goa in straight sets (21-13, 21-8) and edged out Nagaland (21-14, 21-8) in the semi-final to set up a final date with Bihar.
Manipur's sub-junior girls also faltered in the regu semi-final as they succumbed to a 13-21, 14-21 loss in the hands of Bihar girls after a straight set win against Delhi in the quarter final.
The State team were, however placed third.
Manipur's junior boys' regu team also suffered a heartbreak as they lost 9-21, 9-21 to the Delhi team in the semi-final. They finished fourth following a draw of a lot with other semi-finalists Bihar.
Manipur, however, got a reason to rejoice as State's doubles team secured a 21-15, 21-19 win against Bihar in the final to seal the top honour.
In the quarter final, Manipur beat Telangana 21-13, 21-19 before beating Nagaland 21-14, 21-10 in the semi-final.