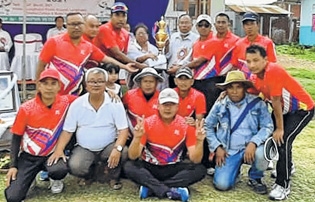 By Our Sports Reporter
IMPHAL, Apr 10 : NAPSA-Kha Imphal eclipsed LCCC-Lilong Chajing by 4 wickets today to claim the title of the 5th T Subol Memorial Veteran T-20 Cricket Tournament at Oriental College and Model Hr Secondary School playground.
LCCC won the toss and posted a modest total of 128 runs for 8 after electing to bat first. NAPSA however went past the target (131) with 3 balls and 4 wickets left to spare to secure the top honour of the 8-team tournament organised by Manipur Veteran Cricket Association.
Rakesh topscored with a 25-ball 33 for LCCC while Prasanjit and Shirinivashan added 22 and 20 runs respectively to ensure the team stack up 128 for 8 in 20 overs.
Doren proved to be a pick of NAPSA bowlers as he scalped three for 20 in his spell of 4 overs and exerted a strong pressure on the LCCC batting line up. Assisting in the bowling attack was Premananda who fetched two wickets for 17 in 4 overs.
Simon and Keshorjit too contributed in restricting LCCC from making a big score by chipping in a wicket each.
NAPSA chase was also not too easy but sensible battings by Premananda (33) and Bhogen (36) helped the team immensely in setting the stage for the close win.
Jeeten, Ashok, Krishna and Jillangamba of LCCC did try their best to keep the chase in check by chipping in with a wicket apiece but it went in vain as NAPSA put up a good show.
Premananda, who produced an all round performance, was eventually named man of the match and earned a cash prize of Rs 1000 and a trophy.
Winners, NAPSA were feted with a cash prize of Rs 25,000 and a trophy while runners up were encouraged with a cash prize of Rs 15,000.
Krishna of LCCC, with 138 runs and 5 wickets in his name, bagged the man of the tournament title (Rs 2,000 cash prize and a trophy) while Syed Mujibur Rahman of Model Club earned best batsman accolade  (Rs 1,000 cash prize and a trophy) for his 187 runs feat.
With 7 wickets under his name Ashok of LCCC fetched the best bowler award (Rs 1,000 cash prize and trophy).
Prizes in all categories were donated by Tongbram Ongbi Romola Devi and her family in fond memory of late T Subol Singh who was the former president of Manipur Veteran Cricket Association.