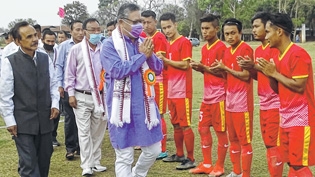 By Our Sports Reporter
IMPHAL, Apr 10 : YWC, Langthabal and CHIKL, Chajing played out a 1-1 draw as the 21st S Birendra Singh Super Division Football League 2021 kick-started today at Lilong Chajing Ground.
In all 6 teams are taking part in this top tier tournament organised under the supervision of Imphal West District Football Association.
The two sides were neck and neck throughout the game but it were CHIKL who enjoyed an early lead with N Leingakpa opening up the scoring account in the 10th minute. Diligent YWC-L however cancelled out the lead in the 41st minute with Yumnam Olibas making no mistake in converting a fine chance.
It was an end to end affair in the second half with the two sides struggling to find the winner but lack of luck and impressive combination of defenders and goalkeepers denied alteration in the scoreline till the final whistle.
PAMYAL, Patsoi will play NC Club, Khonghampat in the next match tomorrow at 2 pm.