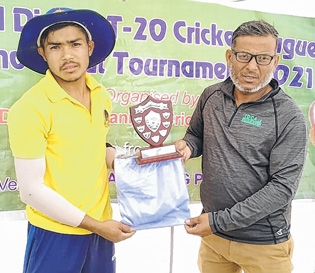 By Our Sports Reporter
IMPHAL, Apr 13 : Al-Ameen banked on Al-Bashid's all round performance to overwhelm LMCC by 40 runs and make themselves into the final of the Thoubal District T-20 Cricket Tournament being underway at Moijing playground.
After being let to bat first, Al-Ameen rode on Al Bashid's knock of 58 runs and Bashir's 40 to post a total of 171 runs for 7 and held LMCC to 131 for 9 wickets in reply.
Though LMCC's overall bowling attack was blunt and struggled to contain Al-Ameen batsmen, Washim managed two wickets. Others finding their names on the scoresheet with a wicket each are Samir, Imaran, Aziz Mirza and Iqbal.
In reply LMCC had a dismal start with losing Akip on golden duck, Samir on 1 and Rafik on 10. Reehaj (40) however gave some hope as he struck well but his departure and losing of Aziz Mirza on 29 led to the team's slump at 131 as remaining wickets kept falling in regular intervals.
Bashid who topscored for Al-Ameen took centre stage in LMCC's innings as he notched up 5 wickets for 34 in 4 overs and earned the man of the match award. Bashir on the other hand had two wickets and Naushad picked up a single to prevent LMCC from building momentum.
WYC will play RCA for the remaining final slot tomorrow.