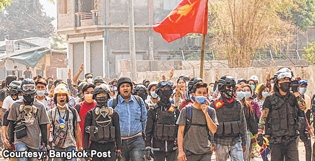 NEW DELHI, Apr 15
In a spartan hillside room in India furnished only with a thin sleeping mat, the Myanmar member of Parliament spends much of his days attentively listening to Zoom conference calls and tapping away messages on his smartphone.
The short, soft-spoken man is among roughly a dozen ousted Myanmar MPs who have fled across the border to India’s remote North Eastern region after the military’s Feb. 1 coup and lethal crackdown on dissent.
Reuters spoke to two of the lawmakers and to a Myanmar politician, all involved with the CRPH, a body of ousted lawmakers that is attempting to re-establish the civilian Government and displace the military.
The three said the group was supporting demonstrations, helping distribute funds to supporters and holding negotiations with multiple entities to quickly form a civilian administration Nationwide. They asked not to be named for fear of reprisals against their families.
Most of the ousted lawmakers are from deposed leader Aung San Suu Kyi’s National League for Democracy (NLD) that overwhelmingly won a November 2020 election, which the military has annulled.
The coup has been met with a fierce pro-democracy movement and tens of thousands of people have taken to the streets, despite the crackdown.
Security forces have killed over 700 people, and more than 3,000 have been detained, including more than 150 lawmakers and members of the former Government. Mobile and wireless internet services have been shut down.
The fear of detention and inability to rebuild a civilian Government without internet connectivity has driven some Myanmar lawmakers involved in the resistance to work from India, the two MPs elected to Myanmar’s Parliament said.
“There is no time,” one of them, who is from the country’s western Chin state, told Reuters. “People are dying in our country.”
A spokesman for the Tatmadaw, Myanmar’s military, did not answer calls seeking comment.
It has accused the CRPH, or Committee Representing the Pyidaungsu Hluttaw, of treason. The group is working to set up a National unity Government to challenge the military’s authority.
‘CAN’T RELY ON CHINA’
Since fleeing to India around two weeks ago, the lawmaker said he had been holding regular discussions with colleagues to set up a parallel administration in Chin State, under directions from the CRPH.
The process is complex, involving building consensus between elected representatives, political parties, ethnic armed groups, civil society bodies and civil disobedience movement leaders, the two lawmakers and the politician said.
The CRPH is also keen on opening communications with India, where at least 1,800 people from Myanmar are already sheltering, and it will seek New Delhi’s blessings for the parallel Government it is attempting to form, the politician said.
“We can’t rely on China, Thailand and other neighbouring countries,” he said. “The only country where refugees are being welcomed is India”.
India’s Foreign Ministry did not immediately respond to questions from Reuters.
This week, NLD lawmakers from Myanmar’s northern Sagaing region held an online conference call, but only 26 out of 49 representatives dialled in, according to the second member of Parliament, who attended the meeting from India.
“We don’t know where the rest are,” the federal lawmaker said, adding two party officials were now trying to track down the missing colleagues.
Some of the fiercest resistance to the junta has come from Sagaing. In the last two months, around 2,000 families involved in the civil disobedience movement in one part of the region have been given financial assistance of around 17 million Kyat ($12,143), the lawmaker from Sagaing said.
INDIAN POSITION
For the Indian Government, the presence - and activities - of escapee Myanmar lawmakers could pose a diplomatic quandary, particularly given New Delhi’s close ties with the Tatmadaw.
But, in recent weeks, India’s position on the Myanmar crisis itself appears to have somewhat shifted, which has also been acknowledged by some CRPH representatives.
At an United Nations Security Council meeting on April 10, Indian diplomat K Nagaraj Naidu said New Delhi is pushing for a return to democracy in Myanmar.
“The first, and most immediate step, in this regard is the release of detained leaders,” Naidu said.
However, India is concerned around internal divisions within the CRPH that could hobble its functioning, a source with knowledge of New Delhi’s thinking said.
Still, the politician involved with the CRPH said he was hopeful that India will engage with the group.
“If democracy wins in Myanmar, it is also a win for India,” he said.
Reuters