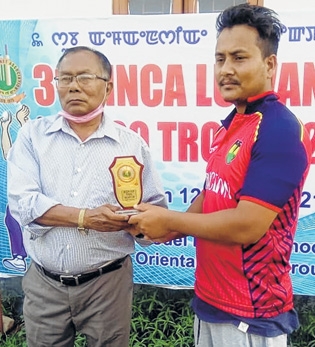 By Our Sports Reporter
IMPHAL, Apr 17 : CHAMP- Khagempalli, TRAU-Kwakeithel and FORCE-Kshetrigao secured victories in today's match of the ongoing 3rd MNCA Luwangpokpa T-20 Trophy.
In the Group A league match (10 overs per innings) staged at Luwangpokpa Cricket Ground-Luwangsangbam, CHAMP registered a 10 wicket win against MAF.
MAF could gather 61 runs for 6 in 10 overs after letting them bat first and CHAMP eclipsed their today 7.1 overs without any loss for the big win.
Lientinthang (29 off 24) and Thangtingou (16 off 18) were significant scorers for MAF before CHAMP's Bonny (20) and Nitesh Sedai (37) finished off the game with ease.
In MAF's innings, Kabir and Somorjit of CHAMP managed two wickets each and Sultan claimed one.
Nitesh Sedai who topscored for CHAMP in the chase was named man of the match.
In a Group B league match staged later at the same venue, TRAU edged PTRC by 2 runs for the second successive win.
TRAU, electing to bat first, collected 117 for 6 wickets in the stipulated 20 overs riding on Rahul (12), Priyojit (24), Bishworjit (23) and Shidharth (13) and had to survive late scare as PTRC went too close to win the game.
RK Rex of PTRC clinched two wickets for 19 in his spell of 4 overs and was instrumental in restricting TRAU to 117.
PTRC, however, bundled out for 115 runs in 20 overs despite RK Rex adding the highest 36 runs off 18 balls in the chase.
Birjit, Bijen and Anand of TRAU bowled cleverly and notched up two wickets each to put pressure on PTRC batting line up who fought till the last ball.
K Priyojit of TRAU who contributed 24 runs and picked up a wicket, was named man of the match.
Meanwhile in the Group D league match played at Model Hr Secondary School and Oriental College playground, FORCE-Kshetrigao overwhelmed THAU by 69 runs.
FORCE posted a big total of 169 runs for 5 after winning the toss and opting to bat first and held THAU to 94 for 9  in 18.4 overs (Rajesh retired hurt).
Pravez starred as he remained unbeaten on 70 off 40 balls after Samir (30) and Saddam (22) providing FORCE the initial flourish. Islaodin was also unbeaten on 21 as FORCE completed their innings.
Rabikanta of THAU produced a prolific bowling display and finished with best bowling figures (3/16 in four overs which include a maiden).
THAU's chase was a disaster as Dayananda wreaked havoc across the batting line up en route to his four wicket finish for 7 in 1.4 overs.
Rohen (21) made the most of the score for the Thangmeiband side and Beconboss was unbeaten on 15 in their innings which also saw Qurshid and Islauddin of FORCE snaring two wickets each to add woes to THAU.
FORCE's top scorer Pravez was named man of the match.