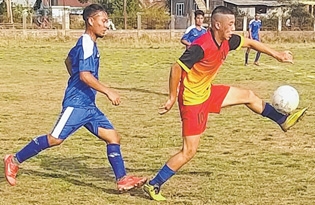 By Our Sports Reporter
IMPHAL, Apr 17 : SDO, Pallel overwhelmed Royal FC, Hiyanglam by 4-0 goals in the Group B opening match of the 2nd Rakesh Singh Second Division Football League which kicked off yesterday at DSA Kakching playground.
Y Gautam took centre stage of the match as he scored twice and crafted many chances to help SDO decimate their Hiyanglam rival.
Although SDO finished big they had to wait for the breakthrough till the additional time of the first half when Y Gautam made a fine effort count.
Having led the first half 1-0, SDO earned its second in the 49th minute through Atom Makhon and third via S Tompok in the 56th minute.
Y Gautam was on target again in the 64th minute and it proved to be the final nail in the coffin. FC Kakching Khunou will play LMLCC, Langmeidong in the next match on Monday at 1 pm.