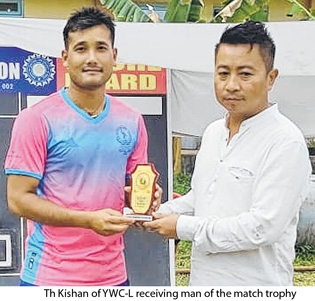 By Our Sports Reporter
IMPHAL, Apr 18 : YWC-Langthabal, RCT-Malom and CRAU-Khamnam Bazar  emerged victorious in today's league matches of the 3rd Luwangpokpa T-20 Trophy organised by Manipur Cricket Assocition at two venues viz-Luwangpokpa Cricket Ground at Luwangsangbam and Model Hr Secondary School and Oriental College ground.
In the Group A league match staged today at Luwangpokpa Cricket Ground, YWC registered second straight victory by edging past PSC, Khuyathong by 28 runs.
YWC, riding on Th Kishan's unbeaten 70  (off 34 balls), Maheshkumar's 33 and Bikramjit's 27,  posted a mammoth total of 186 run for 6 in 20 overs. The target for PSC was however revised to 87 runs in 8 overs under the Duckworth Lewis Stern system after rain intervened for a while.
Earlier in the YWC's innings, Prasanjit, Kenny and Bhomendro picked up a wicket each.
Chasing 87 for the win, PSC were had to work hard and with luck not favouring them, they could gather only 58 runs for the loss of 2 wickets in 8 overs handing YWC the 28 run victory.
Both the wickets during the chase was claimed by Prakashmani.
Th Kishan who topscored with 70 for YWC was named man of the match.
Meanwhile in the Group B league match staged later at the same venue, RCT posted a massive total of 177 runs for 3 riding on half centuries by Jaysingh (60 off 44 bals) and Ishworjit (53 off 43 balls) before restricting YUCC, Kwakeithel to 89 runs in 17.4 overs relying on Sarojkumar (3/9 in 3.4 overs) and Ananda (2/5 in 1 over).
Sanjit, Rahulkumar and Bikash of YUCC shared a wicket each in RCT's innings before their chase slumped despite Dibak's contribution of 32 runs.
Jaysingh who knocked 60 runs was named man of the match.
Elsewhere at Model Hr Secondary School and Oriental College ground, CRAU thumped MPSC by 7 wickets for the first Group (D) stage victory.
MPSC who elected to bat first gathered 117 for 9 in 20 overs but CRAU took 18.3 overs to go past the target (119 total) losing 3 wickets.
Sunil  (45) and Kingson (22) were significant contributor for MPSC in their innings wherein Kala of CRAU scalped three.
Dennis (22) and Bimol (32) set the floor for CRAU's win before Rakesh starred with an unbeaten 49 to secure the man of the match accolade and eventually the win.