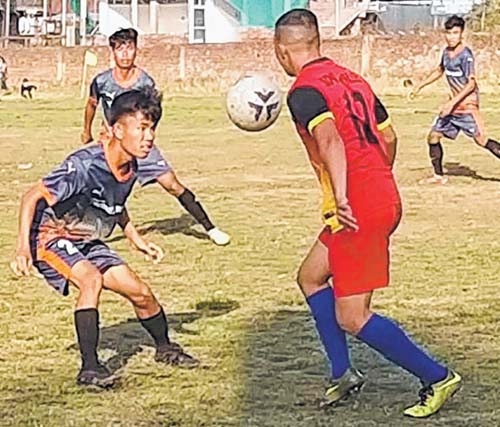 By Our Sports Reporter
IMPHAL, Apr 19 : LMLCC, Langmeidong continued its form today to thump FC Kakching Khunou 3-0 for the second win and to finish Group A winners in the 2nd Sh Rakesh Singh Second Division Football League organised at DSA Kakching playground.
Having overwhelmed FSC, Kakching by 5-2 goals in the Group A opener, the Langmeidong team were in complete control throughout the game.
Lack of luck however held LMLCC back until O Sanathoi of FC Kakching Khunou netted into his own net in the 44th minute to give the breakthrough.
There was no stopping for the team since then as A Umakanta doubled the team's lead in the 51st minute before I Priyobrata banged in the final nail in the 70th minute.
With the win, LMLCC have confirmed their spot in the final league stage where winners and runners up of both groups will face off for the top honour.
Later in the second match (Group B) of the day, KYWAC, Wabagai and SDO, Pallel played out a goalless draw to share the spoils.
Having secured their first win, SDO are on top of Group B with 4 points.
KYWAC will play Royal FC, Hiyanglam next in a crucial match which will decide the group winners tomorrow after FC Kakching Khunou play FSC Kakching for the Group A runners up spot.