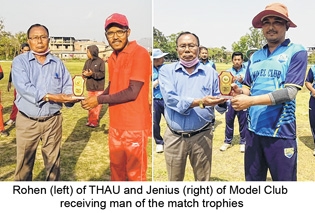 By Our Sports Reporter
IMPHAL, Apr 20 : CHAMP, Khagempalli extended their winning run to two by beating Al-Ameen as PTRC, Patsoi; Model Club, Chingamakha and THAU, Thangmeiband secured their first group stage win in the 3rd MNCA Luwangpokpa Trophy today at Luwangpokpa Cricket ground, Luwangsangbam and Model Hr Secondary School and Oriental College playground.
In the Group A match played at Luwangpokpa Cricket ground, CHAMP stacked up a total of 119 runs for 8 in 20 overs and held Al-Ameen to 101 for 9 in 20 overs. William with 28 runs was the highest scorer for CHAMP today while Thomas (22) and Nitesh Sedai (19) followed suit.
Bashir Rahman of Al-Ameen was in immense form today as he picked up three wickets while Nasir managed two.
Though the target was not so big, Al-Ameen faltered and could muster 101 runs with Sultan of CHAMP battering their line up en route to his four wicket finish.
CHAMP's Kabir, Ravisankar and Somorjit also fetched up a wicket apiece to exert a strong pressure on their Lilong rivals.
Sultan was eventually named man of the match.
In the Group B league match staged at the same venue, PTRC which suffered loss against TRAU in their opening match, improved themselves to secure a 60 run victory against PCC, Mayai Koibi.
Opting to bat first, PTRC rode on Bidash 30-ball 56 (not out) and contributions from Rex (14), M Gemson (14) and Ng Jameson (24) to make a total of 138 runs for 7 in 20 overs. The team then restricted PCC to 78 runs for 9 in 20 overs as Kenjit, Kh Santosh and Kiran all enjoyed three wickets each and limited PCC from scoring much.
In PTRC's innings, Jobanta struck twice while Ranjan, Dipu, Chingkheihunba and Santosh all claimed a wicket each. Ch Bidash who shone with his bat today was named man of the match.
Elsewhere in the Group C league match staged at Model  Hr Secondary School and Oriental College playground, KSDO, Kiyamgei had to rue their decision to field first as Model Club defended their total of 130 runs with style.
Model Club's Karnajit played a sensible innings today before his departure on 44 while Somorjit anchored with an unbeaten 39 after top order and middle order fumbled. Jenius was also unbeaten on 16 as their innings ended at 130 for 9.
Karim of KSDO earned all the praise in this innings as he dismissed four wickets alone to give Model Club line up a torrid time while Shamir managed two wickets.
Shah Nawaz and Razaque also picked up a wicket apeice.
In reply, KSDO struggled from the beginning as Model Club bowling attack led by Jenius proved effective and despite Nawaz Sharif's (34) effort, the team bundled out for 103 in 18.4 overs giving the Chingamakha team the 27 run victory.
Jenius picked up three wickets for 25 runs in 4 overs in this innings as Priyokumar aided him in the attack by removing two of the KSDO batsmen.
Jenius who gave an allround performance was named man of the match.
Later in the Group D league match, THAU overcame PTCC, Patsoi Part II by 5 runs for their first win.
Though then went down to FORCE in their previous outing, THAU amassed a good total of 167 runs for 4 in 20 overs as Rohen (42), Santoshkumar (22), Ranjan (35), Rabikanta (26) played sensibly.
Dominic of PTCC picked up a wicket in this innings before they went too close to winning the game.
Champion (25) and Hemachandra (28) gave PTCC initial momentum before Sohail took centrestage by hitting 47 runs off 30 balls and Kaikuyamba added 34 runs, but latter pressure and prolific bowling by Amarjeet (3/37) and Rohen (2/26) restricted them to 162 for 7 in 20 overs. Rohen who produced an all round performance was eventually adjudged man of the match.
The remaining matches of the tournament have been postponed in the wake of  COVID-19 crisis.