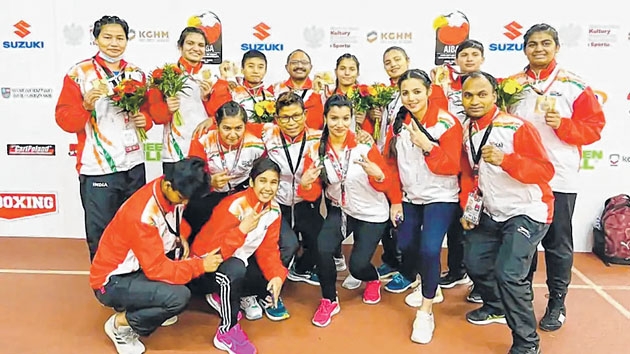 Kielce, Apr 23
Indian women boxers, featuring in seven of the 10 summit clashes, performed magnificently to secure seven crowns in the World youth boxing championships here on Thursday.
Gitika (48kg), Babyrojisana Chanu (51kg), Poonam (57kg), Vinka (60kg), Arundhati Choudhary (69kg) and Thokchom Sanamachu Chanu (75kg) clinched gold medals.
While Gitika prevailed 5-0 over Poland's Natalia Kuczewska, Babyrojisana defeated Valeriia Linkova of Russia by a similar margin after a close opening round.
Later, Poonam (57kg) and Vinka added to the gold rush. While Poonam clinched a 5-0 triumph over France's Sthelyne Grosy, Vinka out-classed Kazakhstan's Zhuldyz Shayakhmetova forcing the referee to stop the contest midway through the final round.
Chanu came through after an engrossing clash against Kazakhstan's Dana Diday which ended with the Indian prevailing in a split verdict.
With this, India equalled its best ever gold medal haul at the marquee age group event with three women's finals still left.
With this, India's women boxers bettered their best ever haul of five medals that was achieved in the 2017 edition in Guwahati.
Gitika opened the proceedings for India and she grunted her way to domination, outpunching her hapless opponent. Also striking was Gitika's impeccable footwork and balance.
Kuczewska, on the other hand, looked clueless for most part, rarely managing to connect and unable to cope with the sheer pace and aggression of her rival. Gitika gave Kuczzewska a bloodied nose in the third round, refusing to take her foot off the pedal even for a second.
Babyrojisana, on the other hand, fought out a more intense battle. Both the boxers spent the opening round taking a measure of each other but the Indian landed enough straights to get a 3-2 verdict in her favour in the first three minutes.
The engagement picked up in the second round and it was the Manipuri who grabbed the upper-hand, negating the Russian's height advantage with some ferocious hooks.
Linkova was also guilty of not defending well as Babyrojisana clinched the second round unanimously.
In the final three minutes, Babyrojisana, a product of M C Mary Kom's academy in Manipur, stepped up the pressure with an attack-first approach to seal the bout.
Later Poonam and Vinka produced similarly dominating performances against their rivals to rightfully claim a top place finish on the podium.
"This has been an amazing effort from our youth boxers especially when the players had to be confined at home for most part of the last year and only make do with online training sessions," said Boxing Federation of Indian President Ajay Singh.
"Our coaches and support staff did a stellar job despite the limitations and challenges. This achievement is a testament of the talent we have in the upcoming generation of Indian boxing," he added.
An unprecedented eight Indians have made the finals, seven of them women. The lone male finalist Sachin (56kg) will fight on Friday.
The results:
48kg: Gitika bt Natalia Kuczewska (Pol) 5-0; 51kg: Babyrojisana Chanu bt Valeriia Linkova (Rus) 5-0; 57kg: Poonam Poonia bt Sthelyne Grosy 5-0; 60kg: Vinka bt Zhuldyz Shayakhmetova (Kaz) RSC-R3; 69kg: Arundhati Choudhary bt Barbara Marcinkowska (Pol) 5-0; 75kg: Sanamacha Chanu bt Dana Diday (Kaz) 3-2; +81kg: Alfiya Pathan bt Daria Kozorez (Mda) 5-0.     PTI