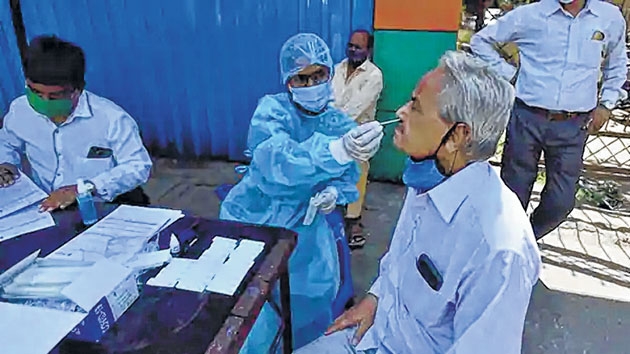 NEW DELHI, Apr 24
Maharashtra continues to be the biggest contributor to the daily tally. The State reported its highest daily new cases at 67,013 on Friday. The country has seen over three lakh cases for four days in a row.
As many as 3,46,786 more people tested positive for Covid-19 in the last 24 hours, taking the cumulative caseload to 1,66,10,481, the Union Health Ministry said on Saturday morning.
India has seen over three lakh cases for four days in a row and is reporting the highest number of daily infections in the world.
Delhi and 11 States -- Maharashtra, Uttar Pradesh, Karnataka, Chhattisgarh, Madhya Pradesh, Kerala, Gujarat, Tamil Nadu, Rajasthan, Bihar and West Bengal -- are displaying an upward trajectory in daily new cases, the ministry said on Friday.
Maharashtra continues to be the biggest contributor to the daily tally. The State reported its highest daily new cases at 67,013 on Friday. It was followed by Uttar Pradesh with 34,254 fresh infections, and Kerala which reported 26,995 new cases.
The country has seen a record surge in the daily fatality count too. A total of 2,624 people succumbed to the disease in the last 24 hours. With this, the cumulative death toll in the country has reached 1,89,544.
In addition to this, 2,19,838 were discharged from various hospitals across India in the same duration, taking the total number of recoveries to 1,38,67,997.
As a result, the active tally has breached the 25-lakh mark for the first time and now stands at 25,52,940. The number was 24,28,616 on Friday.
Vaccination in India
The country has administered 13,83,79,832 anti-Covid jabs so far.
The inoculation drive in India was rolled out on 16 January with HCWs getting inoculated and the vaccination of the FLWs started on 2 February.
The next phase of Covid-19 vaccination commenced on 1 March for those who are above 60 years of age and for people aged 45 and above with specified comorbid conditions.
India extended the drive to include everybody aged 45 on 1 April. Now, the Government has announced that everybody above the age of 18 would be able to get vaccinated from 1 May.
Registration for this category will begin from 28 April on the CoWIN platform and Aarogya Setu app, the Health Ministry said on Thursday. The process and documents required to get the vaccine remains the same as before.
Remdesivir supply
Amid a shortage of Remdesivir in hospitals across the country, Union Chemical and Fertilizer Minister Mansukh Manda-viya on Friday said that 25 new manufacturing sites for the production of the anti-viral drug have been appro- ved by the Government.
He said that Remdesivir's production capacity has now been ramped up to 90 lakh vials per month.
"Since 12th April, 25 new manufacturing sites for #Remdesivir's production have been approved. Production capacity is now ramped up to >=90 lakhs vials per month. Earlier it was 40 lakhs vials/month," Mandaviya wrote on Twitter.
"Very soon, 3 lakh vials/day will be produced. Monitoring is being done on daily basis. We would not leave any stone unturned to supply Remdesivir," he added.
Oxygen supply
The Indian Air Force (IAF) airlifted big, empty oxygen tankers and containers to various filling stations across the country on Friday to speed up the distribution of the much-needed medical oxygen in treating Covid-19 patients.
The oxygen containers will be transported by road or rail to various hospitals once they are refilled.
Containers filled with oxygen are generally not transported onboard military aircraft as they are considered combustible and may pose a risk to the planes.
Officials said the IAF also airlifted doctors and nursing staff from Kochi, Mumbai, Visakhapatnam and Bengaluru for various hospitals in Delhi, besides transporting essential medicines as well as equipment required by the designated Covid hospitals in various parts of the country.
Further, the Armed Forces Medical Services (AFMS) has decided to import oxygen generation plants and containers from Germany to cater to the shortage.
The Defence ministry informed on Friday that 23 mobile oxygen generation plants are being airlifted from Germany. These will be deployed in AFMS hospitals catering to Covid patients. These oxygen-generating plants are expected within a week, the ministry said. The Mint