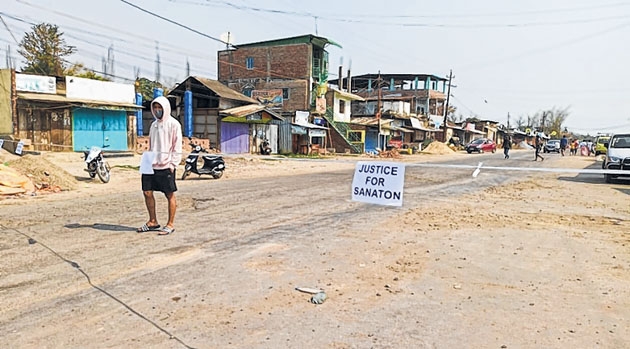 By Our Staff Reporter
IMPHAL, Apr 27: The 24 hours total shutdown from 6 pm yesterday to 6 pm today called by Justice For Sanaton Athokpam affected normal life in many districts.
It may be noted that the JFSA had called the shutdown denouncing Government’s failure to act on its demands including an appeal to file an FIR (First Information Report) in the death case of Sanaton Athokpam, a medical student of RIMS, Imphal.
The 5th Semester MBBS student was reportedly found hanging inside his room at a RIMS gent’s hostel on March 15.
The 24 hours shutdown affected Imphal, Bishnupur, Kakching, Noney, Tamenglong, Noney, Moirang and Wangoi bazar with shops and markets remaining shut for the duration of the 24 hours.
A mass rally was seen staged at Noney bazar demanding justice for Sanaton Athokpam. Protesters blocked vehicular movement and several passenger vehicles including buses were left stranded at Tamenglong, said reports.
In Imphal area, Meira Paibis, many organisations, clubs and student bodies enforced the shutdown at many places.
Volunteers of United Development Organisation, All Manipur Students’ Union (AMSU), Apunba Ireipakki Maheiroi Sinpanglup (AIMS), Democratic Students’ Alliance of Manipur (DESAM), Kangleipak Students’ Association (KSA), Manipuri Students’ Federation (MSF), Students’ Union of Kangleipak (SUK), Rongmei Naga Youth Organisation (RNYO) and Joint Tribes Students’ Association etc supported and enforced the shutdown.
Markets and shops remained closed  at Paona Keithel, Thangal Keithel, Khurai, Lamlong, Keishamthong, Konung Mamang, Porompat, Kwakeithel, Khuyathong, Singjamei and other areas.
Protesters were seen enforcing the shutdown and restricting vehicular movement at Khurai, Lamlong, Porompat, Pangei bazar, Namdunlong, etc. However, religious and customary processions, medical and essential services were allowed. Police personnel were deployed at many places to avert unwanted incidents. There have been no reports of any unwanted incident happening during the shutdown.
Meanwhile, a statement issued by the Justice For Sanaton Athokpam has reiterated its demand for an FIR in the case.
It reiterated that the police should file an FIR and investigate the case more effectively.
It also demanded the police to interrogate Warden of the hostel, where Sanaton was reportedly found dead, and also suspend the RIMS Director and Dean (Academics) immediately.
The JFSA also reiterated that the Magisterial enquiry ordered by the Government has exhausted its time and it should submit its final report immediately. The same report should be disclosed to the JFSA and surviving family members of Sanaton. Further, all involved in the case should be identified and investigated, it said.
The JFSA also appreciated and thanked the people, Meira Paibis, student bodies and civil society organisations including many hill based bodies for supporting the call for shutdown and its cause.