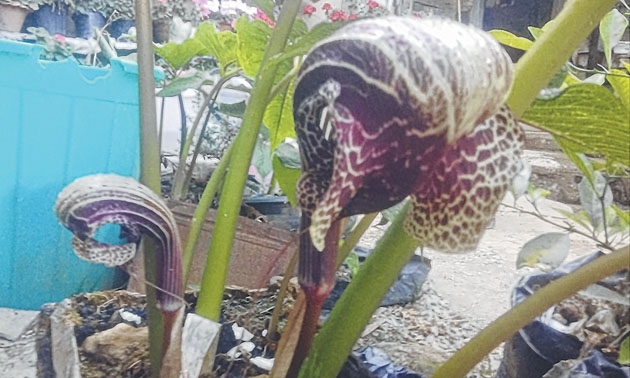 Mungchan Zimik
Ukhrul,  Apr 27 : A dark purple flower resembling a snake "Khamasom Van" has been blooming in Ukhrul town since last year and this year too it has begun to bloom bringing much joy to the beholders.
Khamasom Van  closely resembles a snake in its appearance but this flower lives in modesty and isolation in the dense forest region of Mathasama Khamasom village,  Ukhrul district.
The sighting of the snake like flower blooming on the high altitude of Mathashama forest is rare.
The flower was first sighted in Ukhrul district in 2017 when a group of "Khamatek trekkers" trudged the rugged terrain to explore the high altitude region.
The team collected some plants for transplant at Ukhrul town and the flower gradually adapted to the new climatic conditions and after four years of persistent and patient nursing and caring, have begun to bloom.
Among the few plants brought from the forest, two plants started budding from the second week of April onwards and have finally bloomed in full beauty at Tangrei, Ukhrul town.
The flower blooms for at least two weeks in case there are no interferences or disturbances during blooming season.
A full blooming flower resembles an open mouthed snake with two large eyes. Khamasom Van has a slender stem, bears three broad leaves which give shades to the flower.  While the petals of the flowers are a shaped like a snake-head, the long stigma looks like a snake-tongue coming out of its mouth.