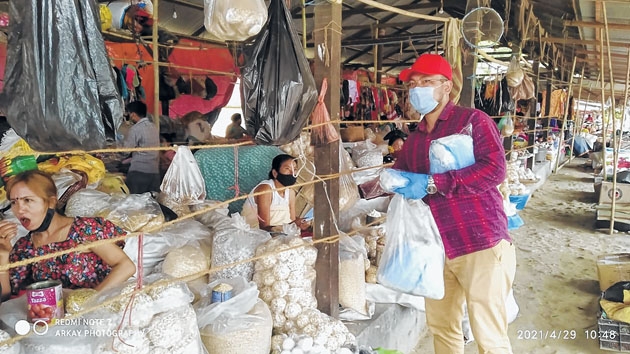 By Our Staff Reporter
IMPHAL, Apr 29 : Concern over the steady rise of Covid cases and related deaths in the State and in view of the street vendors as well as market-goers failing to conform to the SOPs for COVID-19 while trading, several clubs have banned street vending in their localities.
It may be noted here that Uripok Apunba Lup (UAL) had imposed a ban on roadside vending at Nagamapal and  Uripok-Kangchup road (from the foot of flyover bridge on Uripok side up to Naoremthong) for 10 days, with effect from April 27.
Speaking to this journalist, one member of UAL stated that the ban on street vending was imposed as the Covid situation in the State is alarming, with as many as 259 cases reported only on Wednesday (April 28) and as the way, the street vendors and shoppers behave might accelerate the virus spread.
The same measure is also taken up at Andro Parking in Imphal East.
The prohibition starting today is being imposed by Naharol Sintha Lup (NSL).
Secretary of NSL, A Barunkumar informed that the prohibition was imposed, following a threadbare discussion with the clubs operating in the area.
The vendors would be allowed to operate once the situation improves after consultation with the clubs concerned, he added.