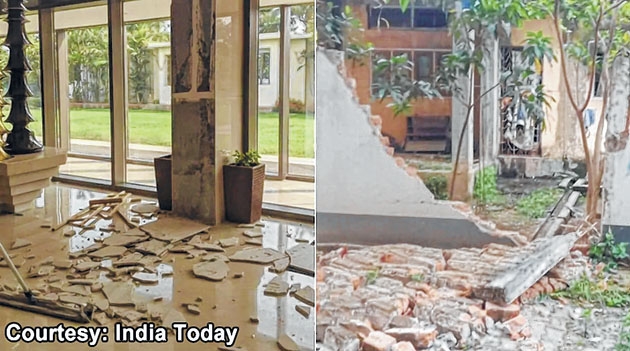 Guwahati, Apr 28
An earthquake of the Magnitude of 6.4 on the Richter scale jolted Assam and other North East States at 7:51 am on Wednesday and a total of 10 aftershocks were felt on the day so far after the main shock.
The tremor was also felt at Imphal in the morning
According to the National Center for Seismology (NCS), the quake occurred at Sonitpur in Assam with the epicentre at 26.690 north and 92.360 east, focal depth of 17 Km.
The epicentre is closer to the plate boundary and located at about 80 Km northeast of Guwahati, 132 Km north of Shillong and 180 km west of Jorhat, said an NCS report.
According to the report, a total of 6 aftershocks of the magnitude of 3.2 to 4.7 on the Richter scale were felt within 2 and half hours of the main shock.
The preliminary analysis shows that the event is located near to Kopili Fault closer to Himalayan Frontal Thrust (HFT).
The area is seismically very active falling in the highest Seismic Hazard zone V associated with collisional tectonics where Indian plate subducts beneath the Eurasian Plate.
The historical and instrumentally recorded earthquake data (NCS catalogue) reveals that the region is affected by moderate to large earthquakes and the most prominent events among those are the earthquake of Magnitude 6.0 on the Richter scale that occurred on July 29, 1960 in Assam.
The earthquake was felt in the entire Northeast region of India and some parts of Bihar, West Bengal and Bangladesh, the NCS report said.
“More than 70 felt reports due to this earthquake have been received from Assam, Bihar, West Bengal and Bangladesh through NCS website and Mobile App having intensity ranging from I to V on Modified Mercalli Intensity (MMI) Scale,” it said.
“Damages to buildings also reported within 100 km from epicentre in areas of Sonitpur, Nagaon, Guwahati as received from Central Seismological Observatory, NCS, Shillong and Regional Meteorological Centre IMD, Guwahati,” the report said.
“A total of 6-number of aftershocks of magnitude range of M: 3.2 to M:4.7 are located within 2 hours 30 minutes from the time of occurrence of main shock of M:6.4, signifying the release of the stress in the vicinity of today’s source zone in and around Sonitpur, Assam,” the NCS said.