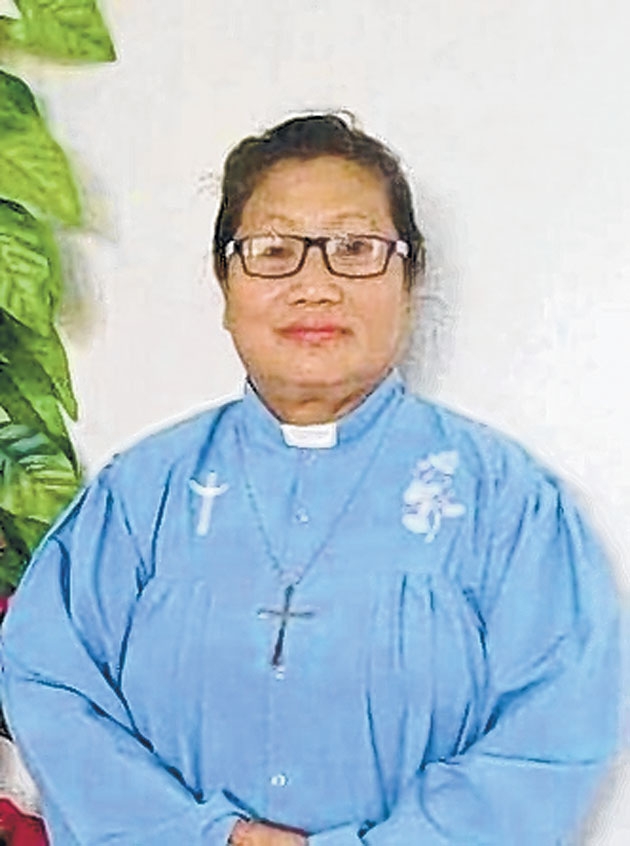 Our Correspondent
KANGPOKPI , Apr 29: One of the founders of Manipur Methodist Church, Reverend Dr Kim Vaiphei (Haokip) passed away at her Yoko Villa in Phaipijang Hebron Veng, Langol, Imphal today.
She is survived by husband, Pastor Obadiah Haokip and family. She departed for her heavenly abode after a prolonged illness at the age of 66.
Born on 11 November 1954, Dr Rev Kim Vaiphei Haokip was the youngest daughter of (L) Pastor Tongkholam Vaiphei and (L) Lenkhoneng Tuboi Vaiphei. She was an  MA (Political  Science) and a Doctorate degree holder in Theology.
She was the first Kuki woman to have passed BD and the first woman president of Manipur Baptist Convention. She was also the first Kuki woman to have passed M Th (Master of Theology) and the first Kuki woman to have Pastor ordination and also the first woman Perish Pastor in the State. She was also the first woman in Manipur to have passed Ph D in Theology and the first District Superintendent in Methodist Church of India.
She served as Women Secretary in Kuki Baptist Convention for several years before the convention sent her as Women Secretary of Manipur Baptist Convention for 10 years on deputation. She also served as Pastor in KBC till 2010.
After she founded the Methodist Church of India in Manipur on October 10, 2010, she became the first Executive Secretary.
She also published several books including 'The coming of Christianity in Manipur: with special reference to the Kukis(1995)'.
Her funeral service was held at Chingmeirong Christian cemetery, Imphal following strict COVID-19 guidelines.
Many mourned the untimely demise of Rev Dr Kim Vaiphei Haokip while sharing the pain and grief of the bereaved family.