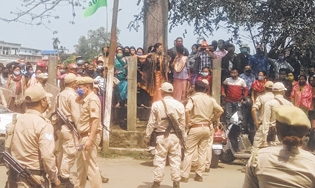 By Our Staff Reporter
IMPHAL, Apr 2: A number of investors in Salai Holdings Private Limited today stormed a branch office of the private firm located at Tera Sapam Leirak.
On the other hand, Managing Director and two members of the board of directors of Salai Holdings Private Ltd have been arrested by police in connection with their purported claim that they could not pay back the investors’ money on account of the company’s bank accounts and assets being frozen including equipment and machinery by the State Government.
A large number of investors thronged the Tera Sapam Leirak office of Salai Holdings Pvt Ltd since 10 am today.
Demanding return of their deposits/investments, the investors called out the private company’s Managing Director Elangbam Brojen for a talk.
In the meantime, Imphal West District Police kept a sharp vigil over the whole scene so as to thwart any untoward incident.
As Managing Director Elangbam Brojen did not come out to meet them, the aggrieved investors marched towards the Keishamthong Elangbam Leikai residence of Brojen.
However, they were blocked by another team of Imphal West District Police at Kwakeithel. As a tense stand-off ensued between the investors and police, the latter fired several rounds of smoke bombs and drove away the agitating investors.
The investors came back to Tera Sapam Leirak and assembled there again. Later Managing Director Elangbam Brojen came out and spoke to the investors.
Brojen said that the company was not able to pay back the investors’ money as the company could not function properly on account of its banks accounts and assets beoing frozen by the State Government.
The next moment, Managing Director E Brojen and two members of the company’s board of directors were taken away by police.
Notably, Salai Holdings Private Limited’s Chairman Narengbam Samarjit and one Yambem Biren made a declaration in London on October 29, 2019.
They claimed that Manipur had been separated from India and announced the establishment of a Manipur State Council (Government in-exile).
Offices of the Salai Holdings Private Limited were closed down one after another from the next day and investors started demanding return of their deposits/investments.
Samarjit was arrested by NIA from IGI Airport, New Delhi on March 25 this year. He was brought to Imphal and sent to police custody.