Many throng to get vaccine shot 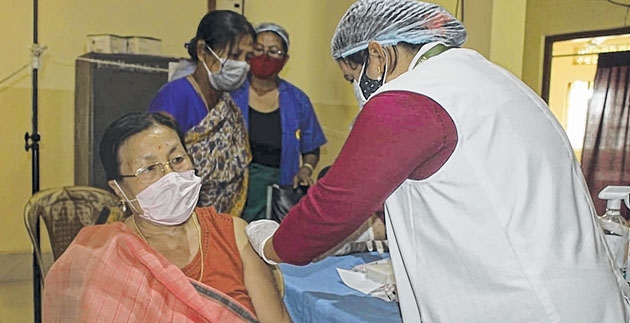 By Our Staff Reporter
IMPHAL, Apr 29: With the sudden spike in Covid cases in the State during the last few days, many have started thronging the several Government run Covid vaccination centers to get the vaccine shot.
This is a sharp departure from the initial days when people hesitated to take the vaccination shot.
People were seen queuing up since morning in front of several Government run healthcare centers where the vaccination programme is being opened.
According to information from the staff of a Primary Health Center at Akampat in Imphal East, the number of people turned has been increasing since the past few days.
One of the nurses in the same vaccination center claimed that around 500 people can be inoculated in a day.
She added that the vaccination programme opened at 10 am and continued till around 5 pm.
Some people who were waiting for their turns to take the dose of the vaccine informed that they came later in the afternoon after they initially registered their names at the same vaccination center in the morning.
While the staff in the PHC (COVID vaccination center) were having a hard time in controlling the people who came there for vaccination, many people were still lining up and waiting for their turns to take the jab.
Meanwhile, State Nodal Officer (Immunization) Dr Thokchom Nandakishore of the State Health Mission, Manipur informed that more than 10,000 doses of Covid vaccine can be inoculated in a day now.
He maintained that the total target for Covid vaccination in the State is around 20 lakh, including those who are aged 18 to 44.
When asked about the stock of Covid vaccines, the SNO asserted that around 3 lakh vaccines had been ordered further by the State Government in view of the upcoming vaccination programme for the people whose ages are between 18 and 44. He added that the State Government is trying its best to make people in the age group of 18 and 44 get the vaccine free of cost as is being done for folks above 45 years.