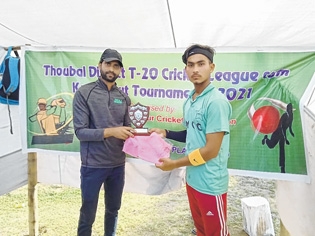 By Our Sports Reporter
IMPHAL, Apr 3 : LMCC, Lilong Mairenkhong got the better of AKSDO, Khangabok by 10 runs in the opening match of the Thoubal District T-20 Cricket League Cum Knock Out Tournament 2021 organised by Thoubal District Cricket Association under MNCA at Moijing playground.
After winning the toss, LMCC opted to bat first and piled up a total of 143 runs for 9 wickets. The team then held AKSDO at 133 for 8 in their quota of 20 overs to open their winning account.
Rafique shone with a knock of 30 runs for LMCC as Akip and Ajij added 27 and 21 runs respectively for the team.
Ingobi of AKSDO wreaked havoc across the batting line up of LMCC and finished with a four wicket haul while Rameshwor scalped two. Their efforts however went in vain as LMCC bowlers proved more efficient.
In the chase, Jiban was the highest run getter for AKSDO as he struck 34 runs before Sanjit gathered 24 runs. AKSDO's remaining batsmen however failed to make their mark and eventually wrapped up the innings 11 runs away from the win and with two wickets left in the hand.
Aziz of LMCC enjoyed a three wicket haul in his spell of 3 overs while Samir picked up two wickets for 14 runs in 4 overs. Iqbal, Washim and Rafique also earned a wicket each in this innings and helped LMCC keep AKSDO batsmen under pressure throughout the innings.
Aziz was eventually named man of the match.
Tomorrow's matches
RCA vs AKSDO at 8 am; WYC vs CAL at 12 pm.