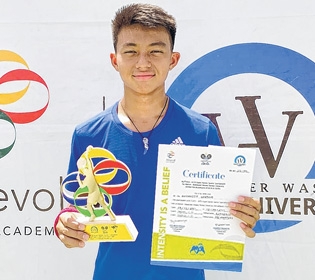 By Our Sports Reporter
IMPHAL, Apr 3 : Manipur's Ashwajit Senjam finished runner up in the U-14 boys singles competition at the ALTEVOL-AITA Super Series Tennis Tournament held at Altevol-Alexander Waske Tennis University in Ahmedabad, Gujarat from March 29 to April 2.
In the U-14 boys singles final, Ashwajit went down 3-6, 6-7 (4-7) to Samprit Sharma to settle for the second place title.
Ashwajit also had made it to the doubles quarter finals in the U-14 National Tournament which was recently held in Mumbai from March 15.