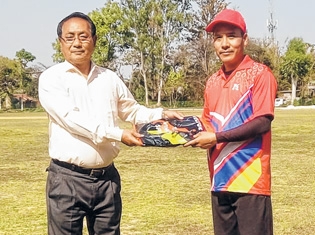 By Our Sports Reporter
IMPHAL, Apr 3 : NAPSA, Kha Imphal made themselves into the semi-finals of the T Subol Memorial Veteran T20 Cricket Tournament being organised by Manipur Veteran Cricket Association at two venues.
NAPSA which sealed a 5 wicket triumph against YUCC for the first win yesterday, came out on top of CHAMP, Khagempalli with a 6 wicket victory today at Oriental College and Model Hr Secondary School ground.
The Kha Imphal side chose wisely to field first after winning the toss and restricted CHAMP to 114 for 4 in 20 overs. They then reached the target (115) in 18.1 overs at the cost of 4 wickets to secure the last four round berth.
Tarun (36) was the highest run getter for CHAMP as Tejbanta (24) and Sanjoy (28) followed suit. The innings saw Premananda, Doren and Ratan of NAPSA chip in with a wicket apiece.
Meanwhile in the chase, Somorendro hit the highest 34 to guide his team to a big win and earn the man of the match accolade.
Simon also contributed 26 runs to NAPSA's tallyas Tarun and Homeshor of CHAMP shared a wicket each in this innings.
The group B league matches which were postponed earlier have been rescheduled on April 6 at 9.30 am. OSCAR will play Model Club at Langthabal Public Ground while YWC-L will play YPHU at Oriental College and Model Hr Secondary School ground.