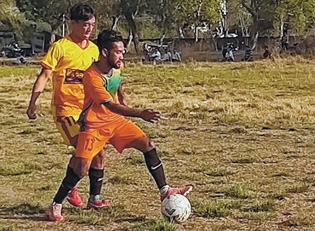 By Our Sports Reporter
IMPHAL, Apr 3 : YWU, Kakching rode on Nobinchandra's treble to carve out a 3-1 win over KMSWC, Keirak in the ongoing final league stage of the 18th KK Memorial 1st Division Football League at DSA playground today.
YWU dominated the game from the onset and were 1-0 ahead till the break via an 18th minute goal by star of the day Nobinchandra.
After the restart, KMSWC made their way back into the game as Md Nusharat found the equaliser in the 49th minute. The parity, however, did not last long with Nobinchandra finding the target yet again in the 63rd minute before he completed his treble in the 83rd minute and made it 3-1.
As the Keirak side failed to convert their chances the scoreline remained unchanged and YWU walked home 3-1.
Earlier in the day, DYA, Elangkhangpokpi and AIFA, Irengband played out a goalless draw to share a point each.
April 5 matches : DYA vs YWU at 12.15 pm and AIFA vs KMSWC at 2.15 pm