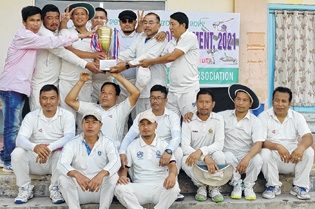 By Our Sports Reporter
IMPHAL, Apr 4 : YWC, Langthabal rode on Jodiba's all round performance to defeat Model Club, Chingamakha by 3 wickets and secure the title of the XVIII MVCA Cricket Tournament-2021 here at Luwangpokpa Cricket Stadium today.
After winning the toss, Model Club elected to bat first and amassed a meagre total of 147 runs for 8 in the stipulated 30 overs and the Langthabal raced to 149 for 7 in 25.1 overs to seal the tournament title.
Dr Sunil made the most of the scoring for Model Club with a knock of 45 runs. Suresh (33) and Iqbal (37) too batted well in this innings which saw Jodiba of YWC-L picking up three wickets alone.
Kumar of the Langthabal team was also in good form and scalped two wickets as his compatriot Gojendro finished with a wicket.
In the chase, Jodiba contributed 41 runs before Shashikanta steered to the win with an unbeaten 35. Kumarjit also added 16 runs for the team in this chase.
Saratchandra of Model Club scalped three but his effort went in vain as YWC cruised to 149 in 25.1 overs with three wickets left to spare. Model Club's Bobin and Iqbal also shared a wicket each in a losing cause.
Jodiba who shone with both the ball and the bat was adjudged man of the match.
Winners, YWC-Langthabal were feted with a cash prize of Rs 15,000 and a rolling trophy as the runners up content with a cash prize of Rs 12,000 and a rolling trophy. Man of the series, man of the final match, highest run scorer, highest wicket taker  and other century and half century run getters during the course of the tournament were also feted.